How Rebellion created the retro-futuristic sounds of Battlezone

Creating the music and sound effects for Battlezone was both an honour and a treat for our Audio Lead, Graham Gatheral. The 1980s was a formative time for him, and he and the audio team are still very much into video games, music and film from that era, such as Blade Runner, Tron, and of course the original Battlezone game.

Graham remembers playing the Atari 2600 port when it first came out. As it is for many of us at Rebellion, the original Battlezone was one of the first video games he played. Needless to say, he was delighted to be given the opportunity to work on this project!

So we asked Graham: What was your approach to the sound and music in Battlezone?

“The pitch was fairly simple: we wanted to pay homage to the music and sound of the 1980s, but stay in line with the updated visual aesthetic of Battlezone on PSVR, and the modernity of virtual reality. In practice, it wasn’t that simple. A lot of research, experimentation, effects processing and iteration was required to capture that warm, nostalgic feeling of the ’80s, suited and booted for 2016.”

We feel our art team have done such a great job with the retro-futuristic look of Battlezone, with its neon world and bold, blocky shapes. With that art style, the source DNA and the short, sharp nature of the missions, Graham had a clear idea of how he wanted the music to sound. 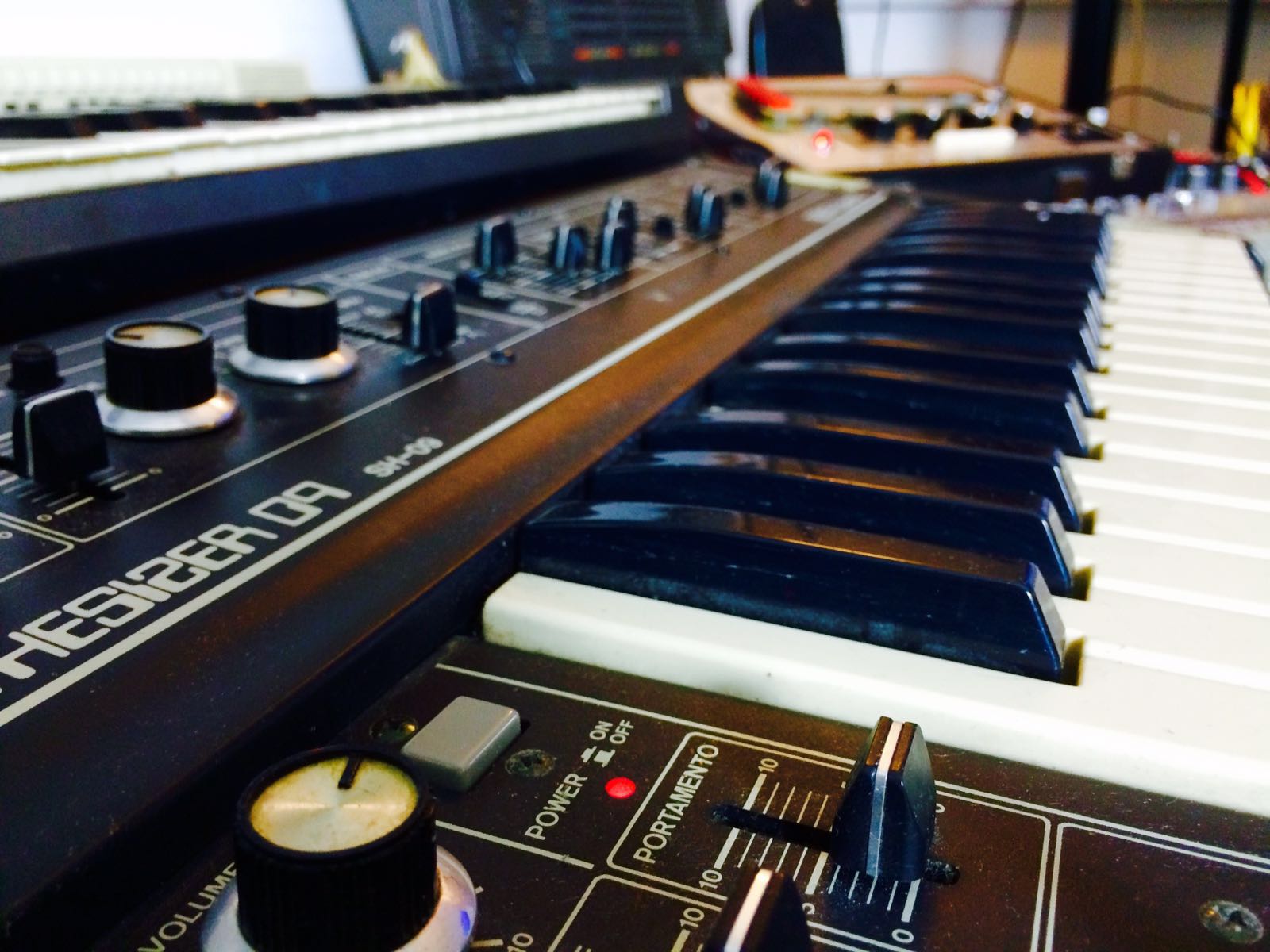 “I began revisiting a lot of the stuff I listened to from the era – ’80s electro, Detroit techno, things like Cybotron and Model 500. I wanted Battlezone to feel pumping, arcade-y – capturing the atmosphere of the lit up cabinets, and the bright action flickering across rows and rows of displays.”

Let’s do the time warp!

“Walking into my studio at the moment is like stepping into the ’80s! There is a bunch of equipment in there directly from the era, mostly stuff I’ve acquired over the years. The TR-606 drum machine, for example, was released in 1981 just a year after the original Battlezone. You can also see the Roland SH-09 analogue synthesizer in these photos, that’s actually from the same year as Battlezone. 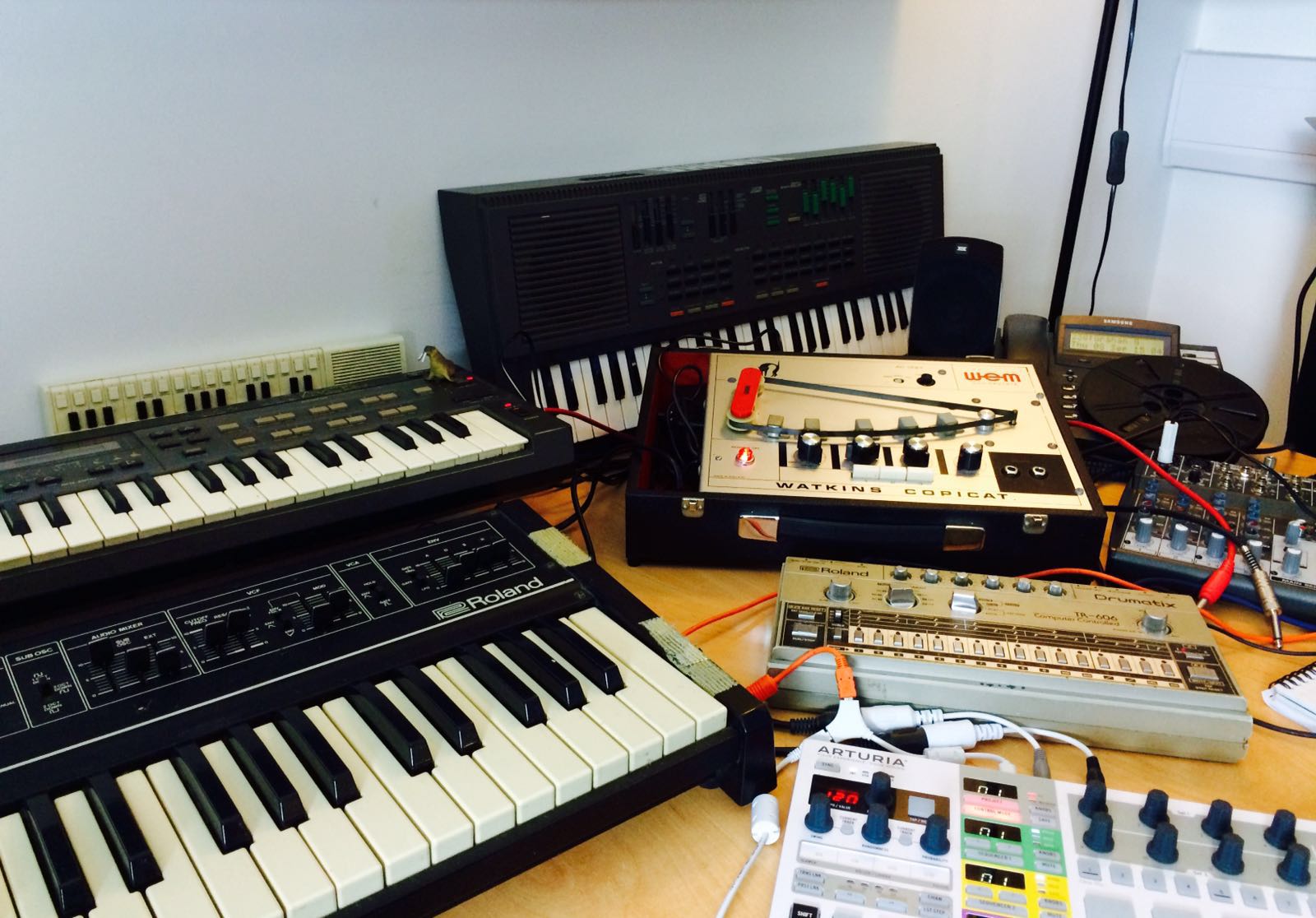 “I used the synthesizers and drum machines as raw material sources. I would make a pattern on the SH-09 and TR-606 – think of that as the raw, authentic 80s material – and run it through a bunch of modern plug-ins, adding effects, reverbs, tape delay… all kinds of sound mangling to bring out that iconic analogue warmth and energy.”

Here’s a bespoke piece we created for one of the game’s early trailers, based on the music of Battlezone:

The process of creating authentic yet modernised material went to another level with the sound effects.

“In ’80s games, sounds were typically generated using dedicated synthesizer chips. The sounds were generated on the fly, rather than being played back like modern sample-based SFX. That distinctive low-res, 8-bit sound is a key component of our nostalgia for that period.

“I thought it would be cool to, wherever possible, use ’80s technology to generate SFX in Battlezone. HUD and GUI sounds were particularly good candidates for this – the front end menu sounds, for example.

“Using a chip emulator – a piece of software that can emulate the SFX of 100s of arcade cabinet and console chips – we created digital reproductions of SFX from the era. We then combined this source material with other, more spectrally rich synthesizer recordings to create sound effects that retained an 80s authenticity, yet with a modern twist.”

To give you an idea, here are a few example effects created using this process:

VR for your ears

Of course, our audio team were creating sounds and music for a brand new platform, and the immersive nature of VR required a new approach in our sound strategy.

“Battlezone uses binaural processing to position sound effects 360 degrees around the player. It’s a highly accurate technique for 3D audio and it’s absolutely perfect for virtual reality, because it delivers a level of immersion in the audio that’s consistent with the graphical output of PlayStation VR.”

Of course it is a bit more extra work to make it all gel, but we hope you’ll agree it’s been worth it!

“I’m really proud to be a part of this team, it’s the first VR game we’re putting out, and it’s an exciting new frontier with new challenges!”

When you play Battlezone, we hope the music and SFX play a part in making the game world as stirring and immersive as possible. We hope you’ll feel like you’re back in those dark, neon-lit arcades, with all the excitement of playing the newest cabinet. Except this time you’ll really be in it, right inside the tank, shooting down enemies and saving the world, all to a cacophony of beeps, bloops and beats!

For all the latest info head to battlezone.com, and be sure to follow us on Twitter at @BattlezoneVR and @Rebellion.