Build your own vehicles then battle friends in TerraTech, out next month on PS4

Greetings, Prospectors. Brace yourselves for the impact of the incoming news: Payload Studios is launching TerraTech on PlayStation Store on 14th August! We’re insanely excited to bring our game to PlayStation after four years of development and 400,000 players, and we have made some changes for console.

TerraTech is all about building Techs from blocks you have scavenged, bought or crafted to either complete missions to earn licenses from other corporations, or wander around to destroy as many roaming enemies as possible. You can create cars, tanks, planes, or even your own unique invention! 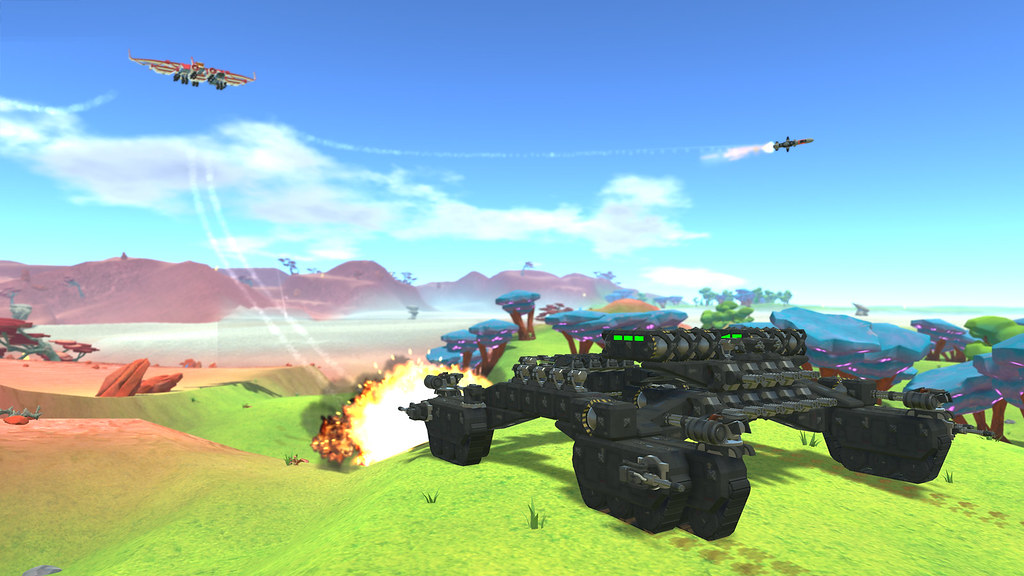 Bringing TerraTech to console wasn’t a stroll in the park, but after some fine-tuning we created an efficient building system for controller users. To enable players to build large Techs with speed and accuracy, we created a ‘snap-on’ mechanic.

While building, the blocks you select automatically snap onto your Tech, leaving you to simply move them around your creation and rotate it to your liking.

When building on console, there is now a block limit based on the value of your blocks, which you can see in your inventory. The block limiter bar at the top of the screen will appear when you’re in build beam and will show you the value of each Tech you’ve made.

As you earn enough experience points to climb your way through the ranks and get more expensive blocks, the cap will be raised to allow for more complex and experimental Techs!

Top the leaderboard in style

Multiplayer has been the most requested feature to be added to TerraTech, so we recently added a PvP mode. You’ll be fighting against other PlayStation Plus members to bag as many kills as you can during the match.

For the launch of TerraTech on PlayStation, we have also released the Venture Cobalt Pack, an exclusive free DLC pack available only to PlayStation Plus members. This DLC pack gives sleek, cool alternative skins for Venture blocks so you can look awesome while you dominate the map.

TerraTech has been built on community-made foundations, which is something we as an indie studio take immense pride in.

From our Kickstarter campaign to release, we have based our development around community suggestions and feedback. Now that we are releasing on console, we can’t wait to see what kind of community we build on PlayStation!

You can get TerraTech on PlayStation Store from 14th August along with the PlayStation-exclusive DLC. Follow us on Twitter, Facebook and YouTube, join the community on Discord and our Forum, and keep an eye out for our weekly streams.