One year on, Guerrilla details how it brought Horizon Zero Dawn: The Frozen Wilds’ deadly Fireclaw to life

To mark the expansion's first anniversary, the studio shares an insightful look into how it created one of the adventure's most fearsome machines

One year ago, we released The Frozen Wilds – an expansion for Horizon Zero Dawn that adds a whole new chapter to Aloy’s quest, including new territories to explore, new quests to complete, and dangerous new machines to hunt.

In honour of the expansion’s one year anniversary, we sat down with two of our developers; Richard Oud and Pinar Temiz, to talk about breathing life and character into one of The Frozen Wilds’ fiercest additions: the bear-like Fireclaw. 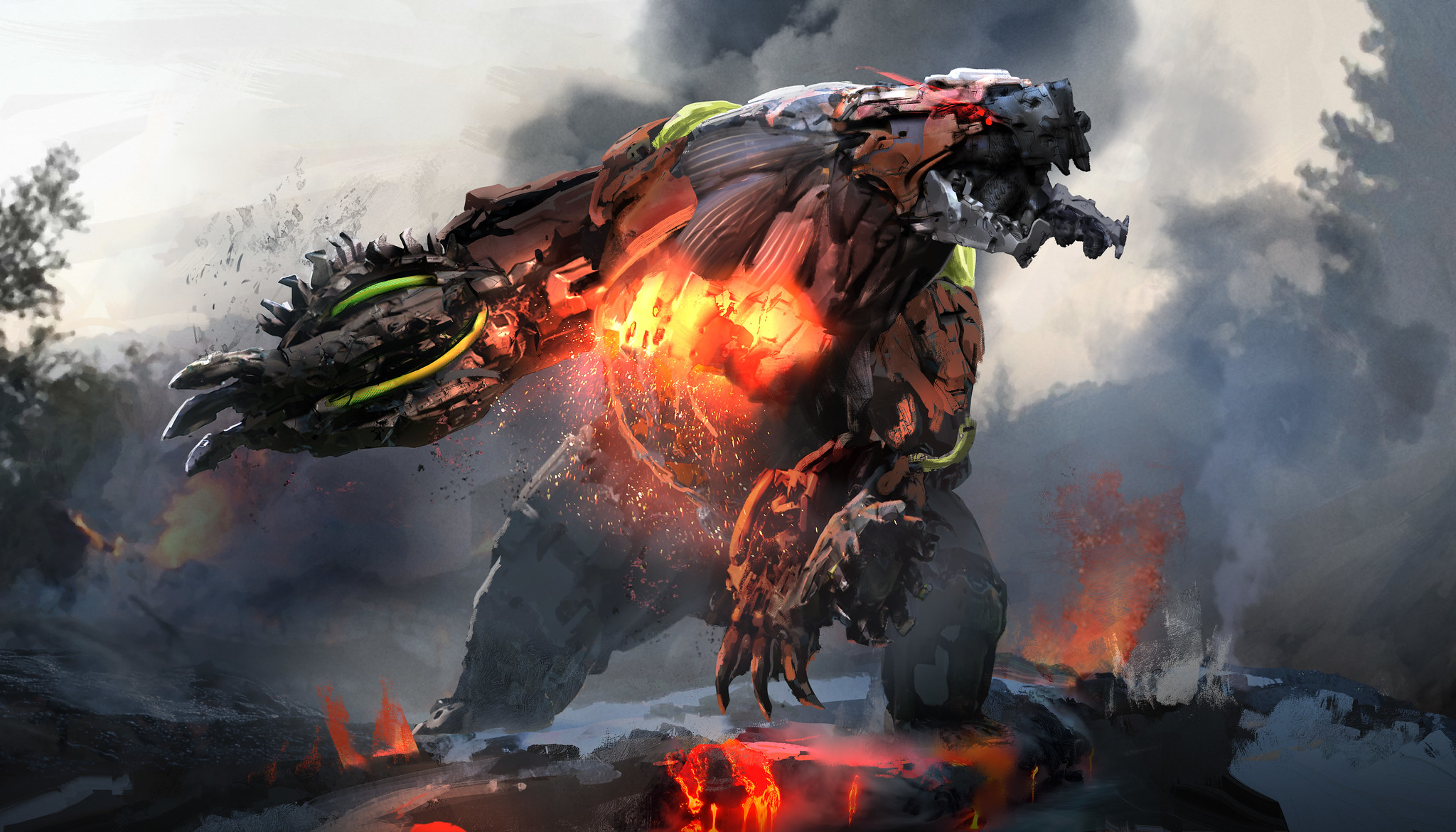 “Originally we were going to have a bear-like machine in Horizon Zero Dawn, but we had to abandon the idea because of time constraints,” Lead Animator Richard Oud recalls. “It was a shame, because everyone felt it had potential. So when we started working on The Frozen Wilds, the bear concept seemed like a natural choice right away.”

The team set out to develop the bear concept into a pair of full-fledged machines, starting with a set of design document and visual design concepts. 3D models of the machines were then created and delivered to the animation department.

“From there, we started creating tests and animations for the machines based on the movements and attack areas that were outlined in the design documents,” Richard says. 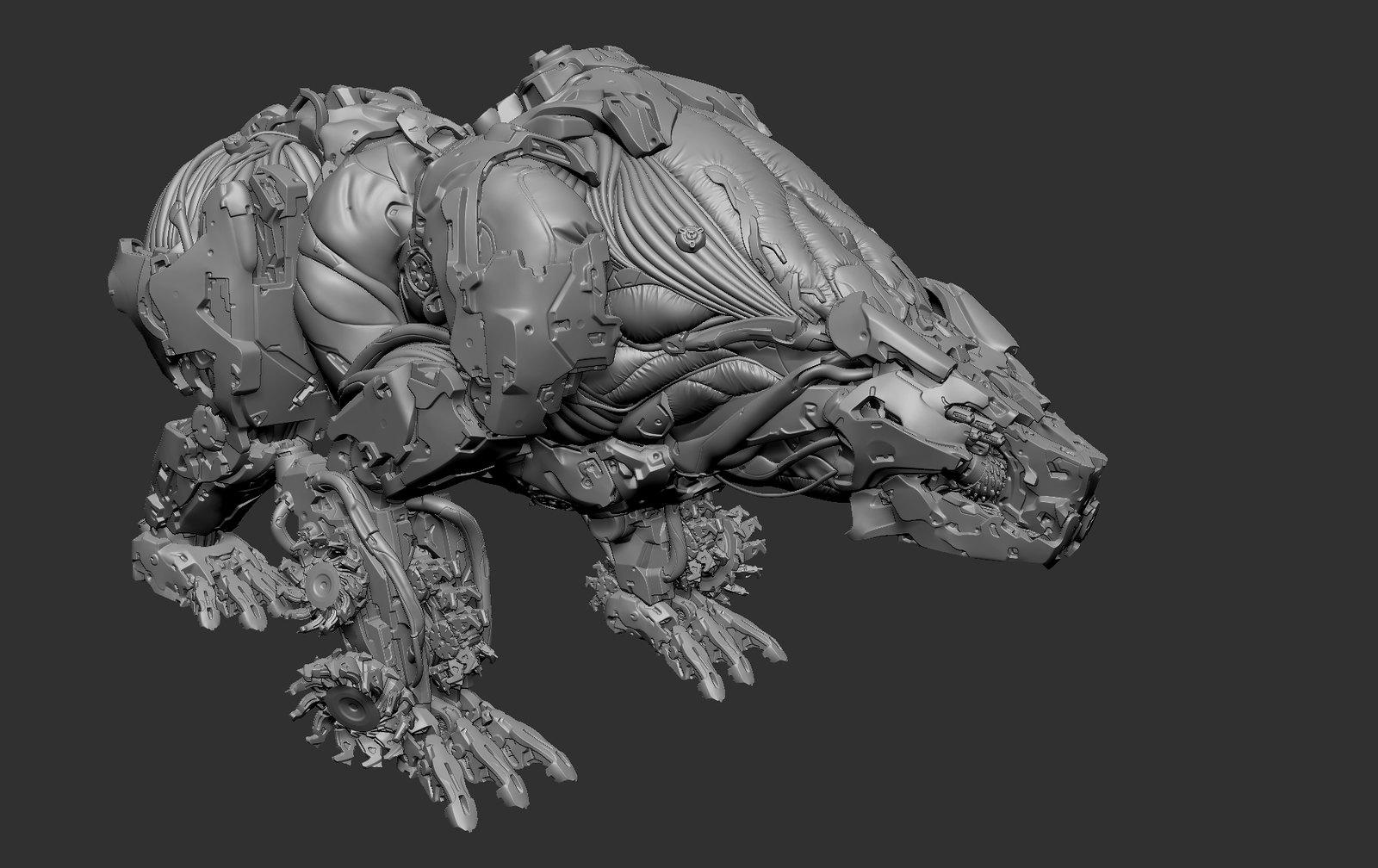 Not everything in the design documents was implemented one-to-one. After a few tests the animation team felt that certain head-on attacks would be too difficult to read for the player. A bit of back-and-forth between the design and animation departments led to a mutually-satisfying solution.

“We were able to improve the readability of the movement by having the machines attack at more of an angle,” Richard says. “This opened up its silhouette to the player, allowing for a much better impression of speed and motion.”

Once the machines were able to move and attack, the AI department put them in the game and Senior Sound Designer Pinar Temiz began the process of providing them with sound effects and vocalisations.

“The timings of the animations largely need to be locked before I can start implementing their corresponding sounds,” Pinar explains. “Of course, I can already start collecting materials and textures based on what the design doc tells me – in this case, that it’s a huge bear-like machine with lava-based attacks.”

In addition, the basic movement sounds of the Fireclaw drew from a similar set of materials as the other machines in Horizon Zero Dawn, which gave Pinar a clear starting point. “The machines in Horizon Zero Dawn are all supposed to be constructed from special alloys and high-tech polymers,” Pinar says, “so I tried to avoid making the movements sound too clunky or metallic.”

For the basic movements and walk cycles of the Fireclaw, the animation team had planned to reference nature footage of grizzly bears.

“We quickly switched to polar bears, though, because their movements are much more distinguished,” Richard says. “Polar bears have slightly longer necks than grizzlies and when they run, it almost feels like they’re pulling themselves forwards with their heads.” 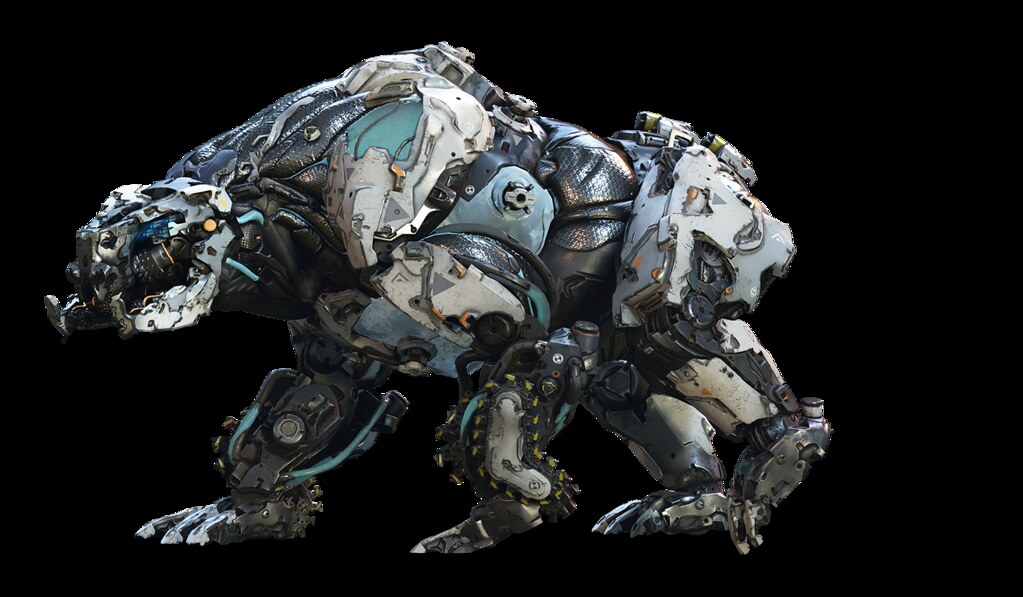 Another important source of inspiration for the Fireclaw’s movements came from an unlikely place: YouTube clips of Red Pandas play-fighting.

“I felt like we needed something extra, to prevent the machine’s movements from becoming too straightforward and predictable,” Richard says. “So I started looking at reference footage of other species, and that’s how I came across the Red Pandas. They looked adorable, but I was struck by the way they dropped and rolled and use their weight to pull their opponents down.”

Pinar also looked beyond the target species for inspiration. “For the Fireclaw’s vocalisations I initially studied recordings of bears – in particular their grunts and sounds of exertion while moving around,” Pinar says. “Then I began searching for other animals that sound intimidating in a grumpy and gurgly way, and I quickly arrived at walruses and seals.”

Combining their grunts with synthetic sounds and even human performances, Pinar then began layering and processing the snippets to achieve the desired vocalisations.

A dilemma that animators and sound designers frequently encounter is repetition: if the motions or sounds of a character are presented in the exact same manner over and over, it quickly becomes artificial and grating to players. At the same time, development time and memory are finite resources, so throwing endless amounts of varied content at the problem is not a workable solution.

At Guerrilla, the animation and audio departments devised systems that use randomness to pick and mix from a limited pool of content in order to achieve variation.

“We actually ran into this issue very early on in the development of Horizon Zero Dawn,” Richard says. “When Aloy rode her mount it would feel repetitive – you could tell it was a cycle, particularly when travelling greater distances. Our solution was to create different versions of the walk cycle for the mount, and then randomly blend between them to achieve a natural, non-repetitive look.”

“Audio’s solution works along the same lines,” Pinar adds. “In the walk cycle example, we’d have a container of ten to twenty snippets of sounds and then randomize through them, combining them into different layers of sound with every footstep. We’d add a little bit of pitch shift on the fly to add further variation, and we even differentiated between front and back footsteps on the quadrupeds.”

One particular barrier the animation department had to overcome stemmed from the fact that the Fireclaw and the Frostclaw could walk on four as well as two legs.

“As soon as we added a set of bipedal animations, it instantly started feeling like a guy in a metal bear suit,” Richard laughs. “So we had to comb through a lot of nature footage to find ways to fix that impression. Locking the hips of the machine during bipedal movement, which made its strides more awkward and ungainly, was one way we were able to mitigate the issue. 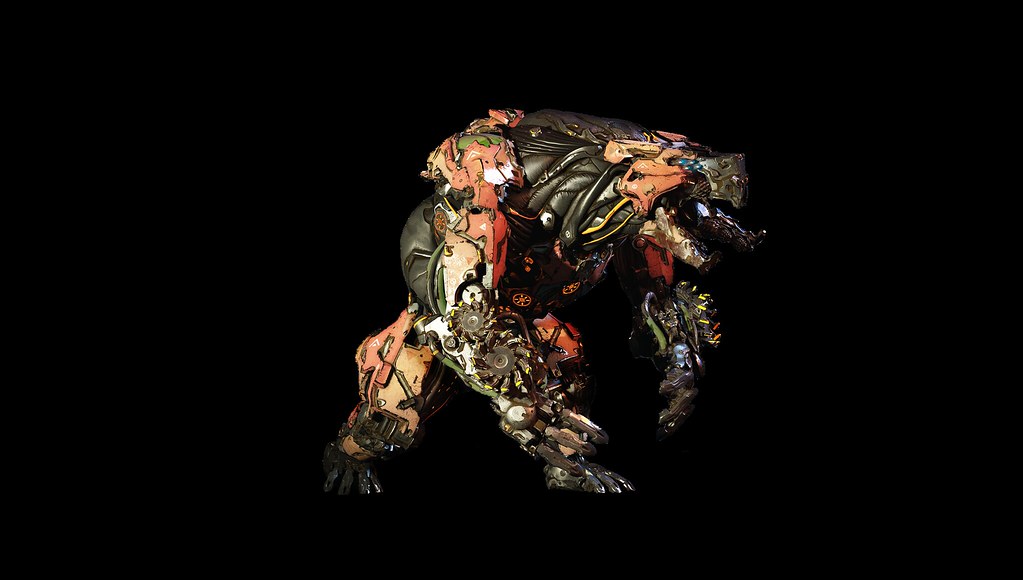 “Similarly, Pinar’s use of human performances in the mixes for the machine vocalisations proved tricky to get right. “Our hearing is just really adept at recognizing human voices. I pitched them down and mixed them in with other sounds, but there are still certain samples in the final mix that come close to what I would qualify as a human voice,” she says. “Oh no, I hope people don’t go searching for them now!”

The differences between the Fireclaw and the Frostclaw actually go beyond their distinct models and sizes. “Certain Fireclaw-specific attack animations, such as the one different attack where it grabs and throws rocks at the player, required us to figure out a whole new posture for the machine,” Richard says. “When it handles the rock you can see the machine actually tilt its center of gravity back, to compensate for the extra weight.”

The reference for the postures came from watching blockbuster superhero movies. “Hollywood has become really adept at giving CGI characters, particularly supernaturally strong ones, a sense of weight and exertion without inhibiting their speed and responsiveness,” Richard says. “They’re masters at striking that delicate balance.” 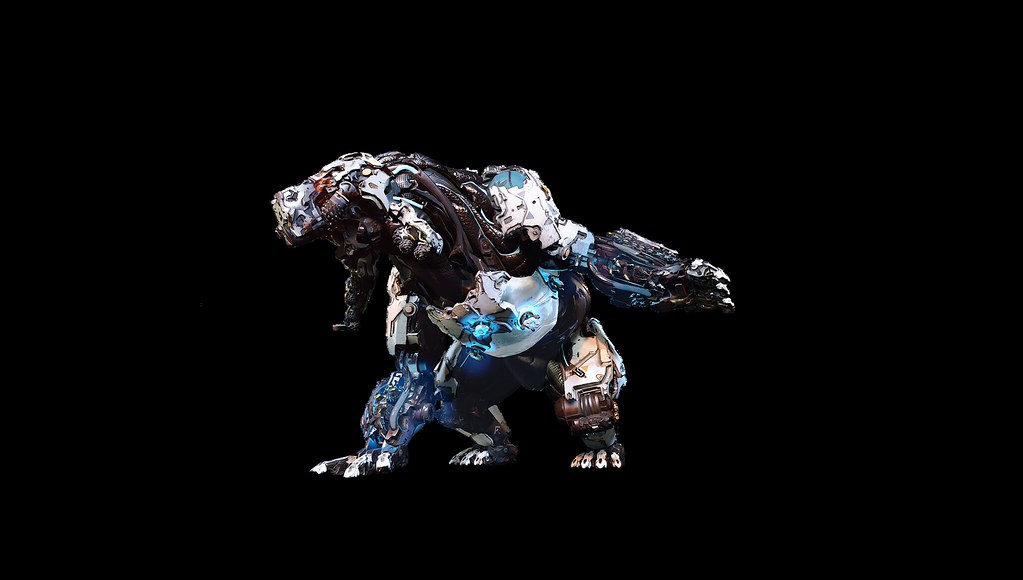 “For me the difference between the two machines wasn’t so much their personalities but their powers,” Pinar says. “The Fireclaw and the Frostclaw are both grumpy and dangerous, but the Fireclaw has lots of fire and lava elements, which affects not just its attacks but also its vocalisations. I even put little lava bubbling sounds in the gurgles of the Fireclaw.”

Despite their different fields, Richard and Pinar both had very similar goals for the Fireclaw: to make it move and sound like a heavy, dangerous machine that could quickly attack and respond to the player without losing its sense of weight and physical presence. The end result meets those goals in every respect, presenting players with a formidable challenge with every encounter.

Even bigger and more powerful than its ice-based little brother, the Fireclaw can shrug off fire-based attacks and explosions like they’re nothing.

It’s a lumbering hulk of steel and polymer that can easily rip huge chunks of rock out of the ground to use as shields or weapons. Seasoned players will find that taking down a Fireclaw is no simple task… but then, neither was building it in the first place.

We hope you enjoyed this look into the creation of the Fireclaw! We’ll be celebrating the anniversary of Horizon Zero Dawn: The Frozen Wilds all week, so keep an eye on Guerrilla’s official Facebook and Twitter accounts for more content.

One thing is for sure, Guerrilla Games knows how to make games, I’ve enjoyed Horizon Zero Dawn alot and I’m about to start a New Game+ playtrough! Now a birdy just tweeted that Sony patented “Remastering by Emulation”, now if that is true that Playstation 5 will emulate Playstation 4 games, I cant even imagine how Horizon Zero Dawn might look in future. Even further, if it applies to Playstation 3 games.. oh boy oh boy