The creators of Resident Evil 2, MediEvil, Spyro, Crash Bandicoot on remastering their classics for PS4

Since the launch of PS4 and PS4 Pro, several legendary franchises have been reborn for PS4, with rebuilt graphics and refined gameplay. But it takes a lot of hard work and technical know-how to reimagine these games for a PS4 generation.

To get more insight, we asked the developers behind several impressive remakes — including the eagerly awaited MediEvil and Resident Evil 2 — to provide an inside look at their development process.

“It has been no easy task bringing Sir Dan back from the dead but Other Ocean Emeryville is always ready for a challenge.

“To keep this remake as true to the original as possible, our first step was to extract all the level geometry from the original game and then place it into the new engine to serve as our map for the placement of every tree, building, wall, etc. Once placed, we get a very strange version of Gallowmere that doesn’t quite feel like home just yet.

“To make Dan feel more at home, we then review each piece of low resolution PS1 art, compare it to the PS1 concept art we have, and then develop our own concepts to update the visuals, all while keeping an eye on matching the tone of the original game. Every piece of art, from tombstones to timepieces and everything in between, has been reinterpreted, reconcepted, and remade. Thanks, art team! 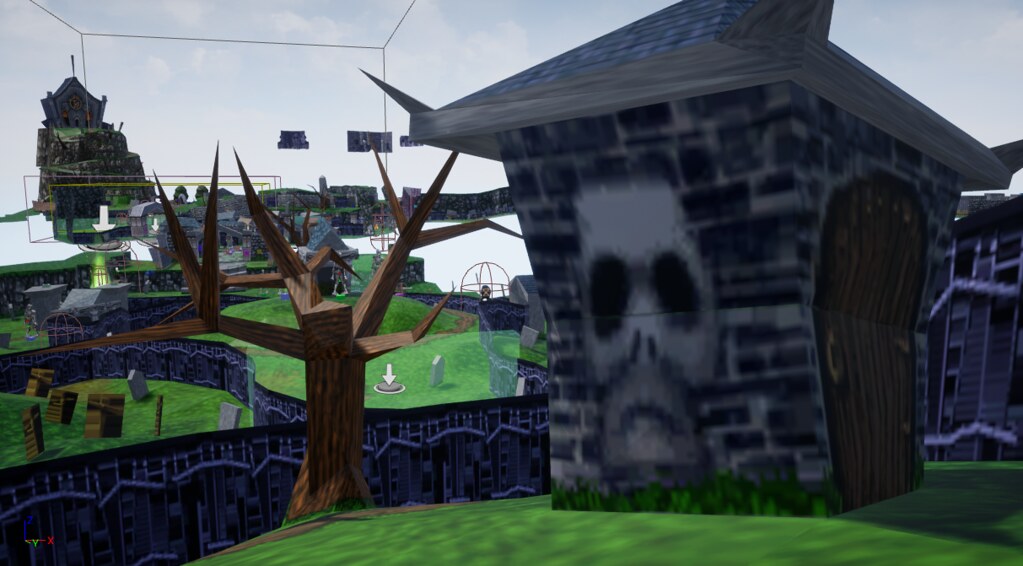 “Aside from the straightforward art updates, we also need to consider our draw distance is now no longer cut short from a black fog just feet away from Dan and our aspect ratio has shifted from a boxy 4:3 to a cinematic 16:9. This requires us to build out areas in the distance that didn’t even exist in the original game – so much more for one-eyed Dan to see!

“With all that extra space, we’ve had to fill in some gaps. In Enchanted Earth on PS1, for example, many of the trees you see are just bitmaps. We’ve created tons of trees and foliage to fill in those gaps and make this level really come to life:

“In doing so, we hope to create a greater sense of the world of Gallowmere and all its fabled creatures, critters and creepy locations!

“Resident Evil 2 has always been a series favourite for many and we heard our fans loud and clear when they voiced their desire to see it remade/re-imagined on modern platforms. Big thanks to all the Resident Evil fans from around the world, as you really helped us show why this title had to be made. So we’ll be doing our best to give you an experience you’ll never forget – a completely re-imagined Resident Evil 2 that takes the 1998 original to a new level. 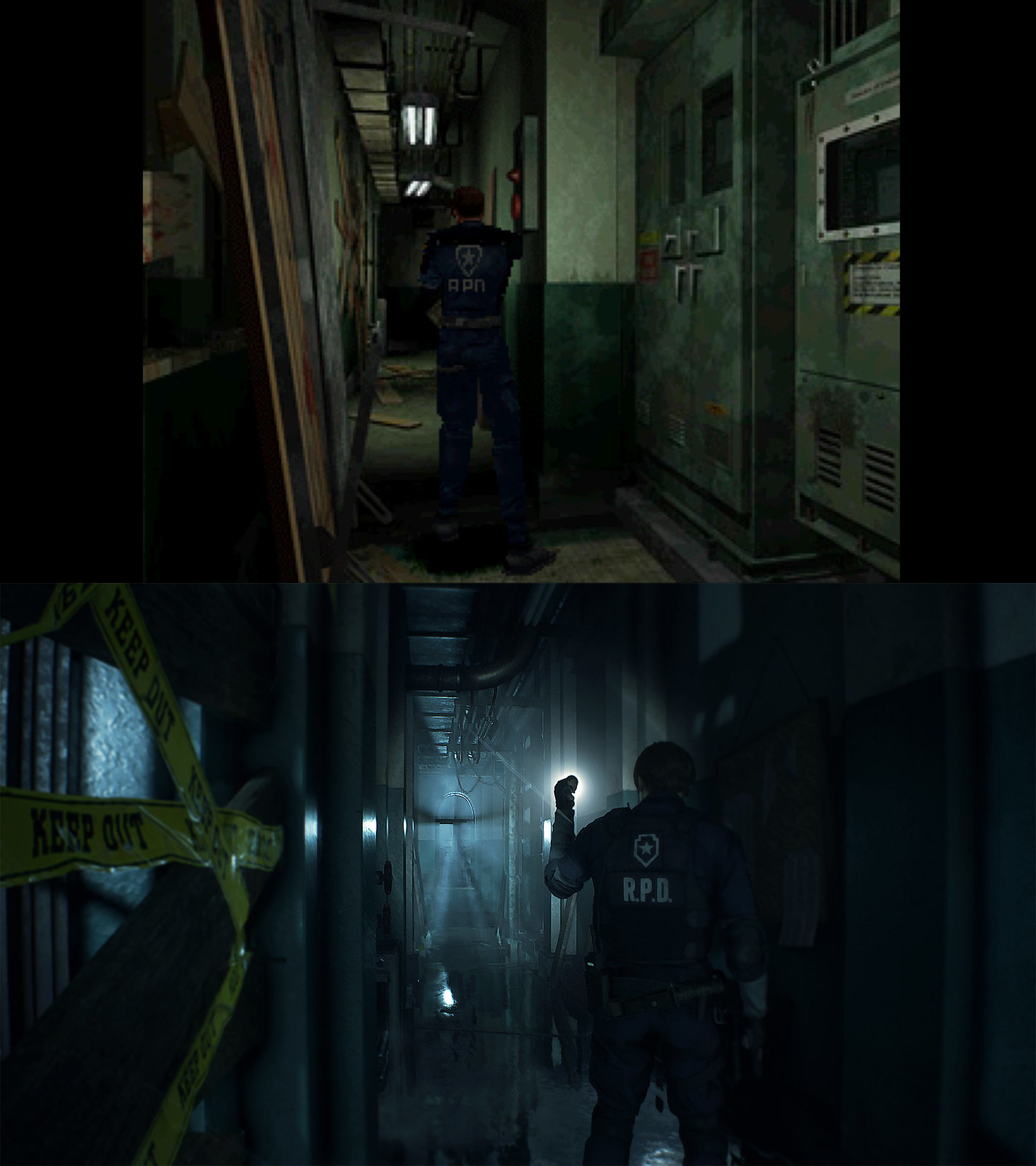 “The title took a long time to produce for many reasons, because as you can imagine, popping open the hood and making any changes to someone’s favourite title can be tricky. The end result was that we wouldn’t just ‘remake’ it, but create an all new version of the game that embellishes further on the story, provides deeper gameplay, looks absolutely amazing and stays true to its terrifying survival horror roots.

“Since the PS1 original released in 1998, technology has evolved in a major way, but we’re also fortunate enough to have our own new game engine to take Resident Evil 2 to the next level. It’s being created on Capcom’s proprietary RE Engine which was also used for Resident Evil 7 biohazard, so players can look forward to terrifyingly photorealistic visuals, immersive sound via binaural recording technology, 4K resolution and HDR support on PlayStation 4 Pro, and much, much more. 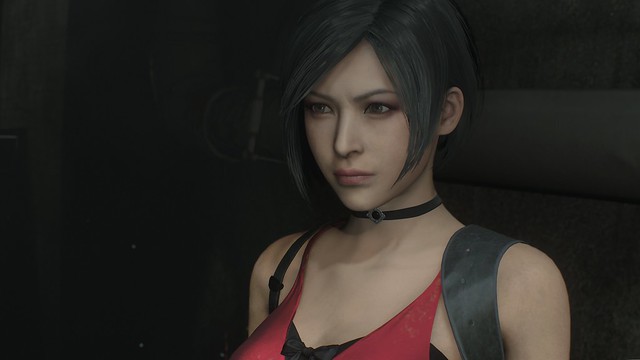 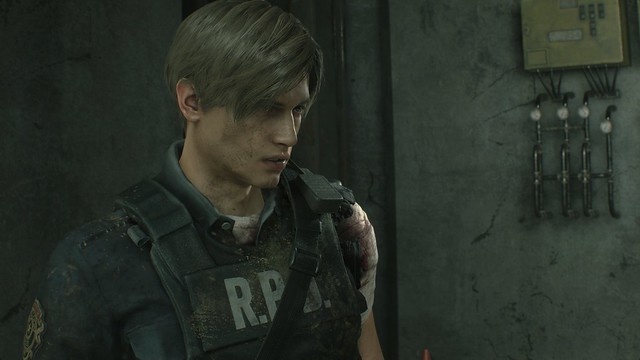 “As for what’s been updated in the new game – simply said, we want Resident Evil 2 to be a fresh experience for both series veterans and newcomers alike. Certainly not an exhaustive list, but we’ve done things like adding the new over-the-shoulder perspective, changing up the puzzles, and modifying certain encounter moments. Because, let’s face it. If you already know there’s a Licker coming around the corner, that’s just no fun in a survival horror game, is it? 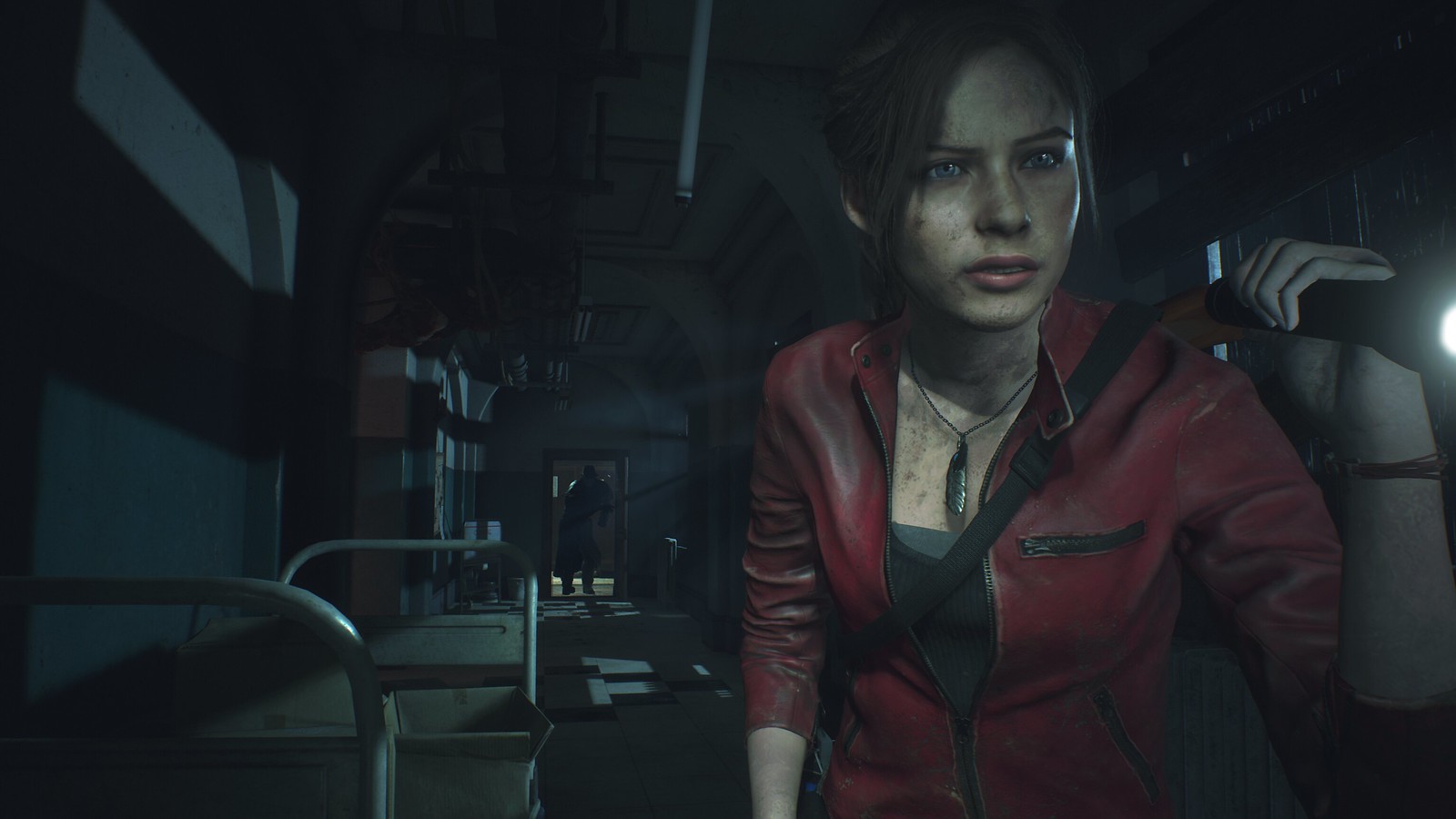 “We’re only a couple short months away from release so please look forward to Resident Evil 2, coming to PlayStation 4 on 25th January, 2019!”

“When developing the levels, it was important to us that the Crash Bandicoot N. Sane Trilogy stands up visually against other PS4 generation titles. To that end, we felt the standard remaster approach of raising texture resolutions with minor geometry adjustments would not be the right way to bring back such an iconic franchise.

“Our goal was to build each level from the ground up so it stays true to the original and looks like you imagined it in your mind. This means that the levels in the N. Sane Trilogy are a lot more lush, vibrant, and full of life but they still have the authentic gameplay experience fans remember. 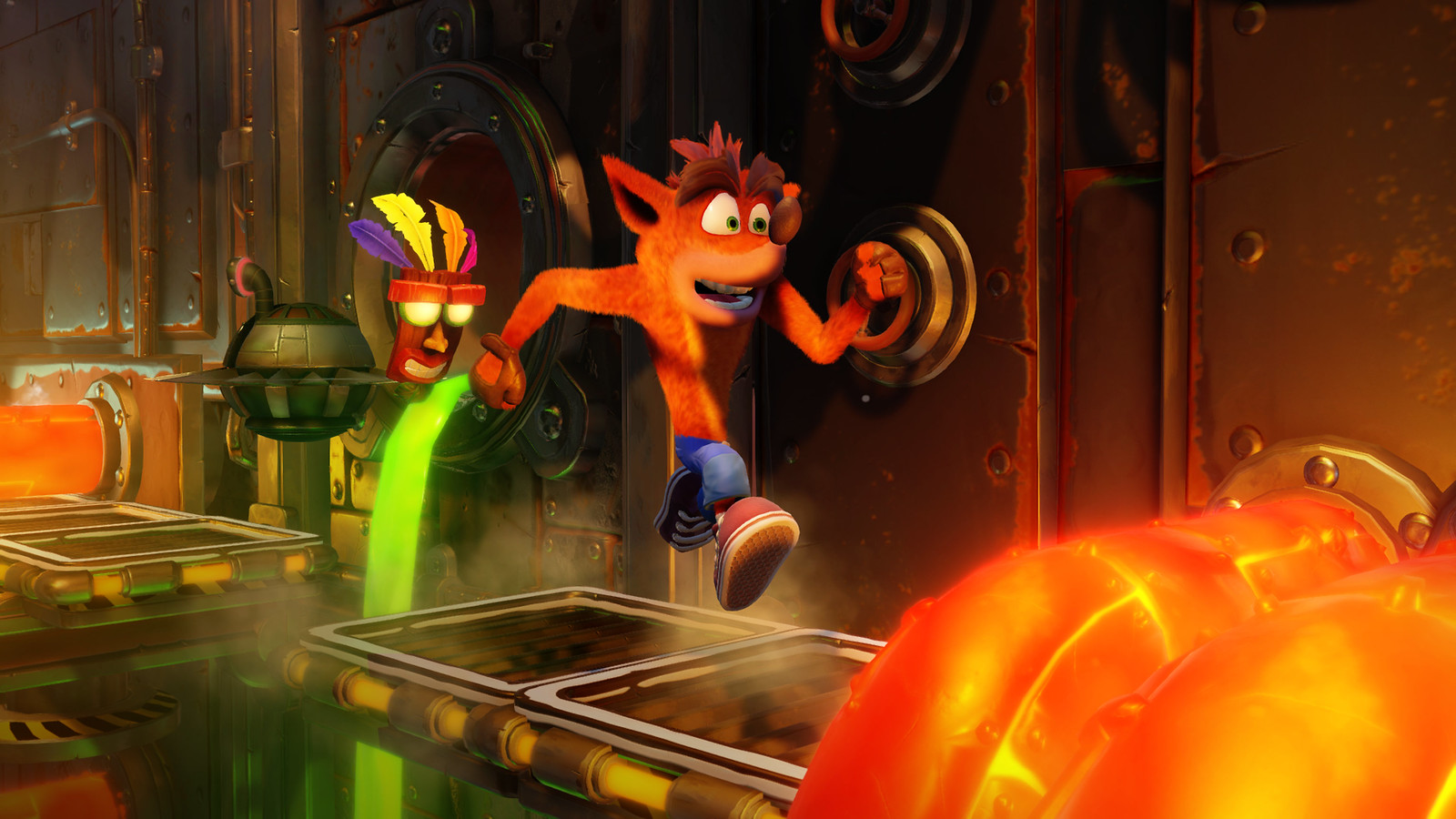 “There have been so many technological advancements since the PS1-era, whether it be the raw power of game consoles now available to us, disk capacity, or improvements and advancements in game engines.

“Texture resolutions are now 60 to 100 times what they were on PS1, and because of the additional computing power available to us on modern consoles we can now also increase the draw distance for our environments, add dynamic lighting, and add more ambient life to the levels through VFX and animation.

“All of the levels in the N. Sane Trilogy are so beautifully rendered and brought to life, loading into N. Sanity Beach for the first time and watching the water break on the shoreline speaks for itself!

“We wanted to stay faithful to the inspiration of the originals, but we also didn’t want to shy away from making some improvements or additions to the game that we knew fans would love.

“One of the most obvious examples is the addition of Coco, a second re-playable character across all three games. We also knew Crash fans were extremely competitive, so we brought Time Trials and online leaderboards to all three games as well.

“We didn’t stop on release day though! Since our launch in 2017, we’ve added two bonus DLC levels Stormy Ascent and Future Tense, and have brought HDR support to the N. Sane Trilogy for PS4. Two of my favourite levels to showcase on a PS4 Pro with HDR-enabled would probably have to be N. Sanity Beach and Toad Village, they really make you feel like you’ve stepped into an animated film, it’s amazing!”

“It was a passion project of ours to bring Spyro Reignited Trilogy to PS4. We wanted to give players a new way to experience this journey with Spyro on PS4, while staying true to the original magic and sense of wonder we all felt 20 years ago. When re-imagining Spyro’s controls, our goal was to design them in a way that felt familiar, yet fresh and modern. 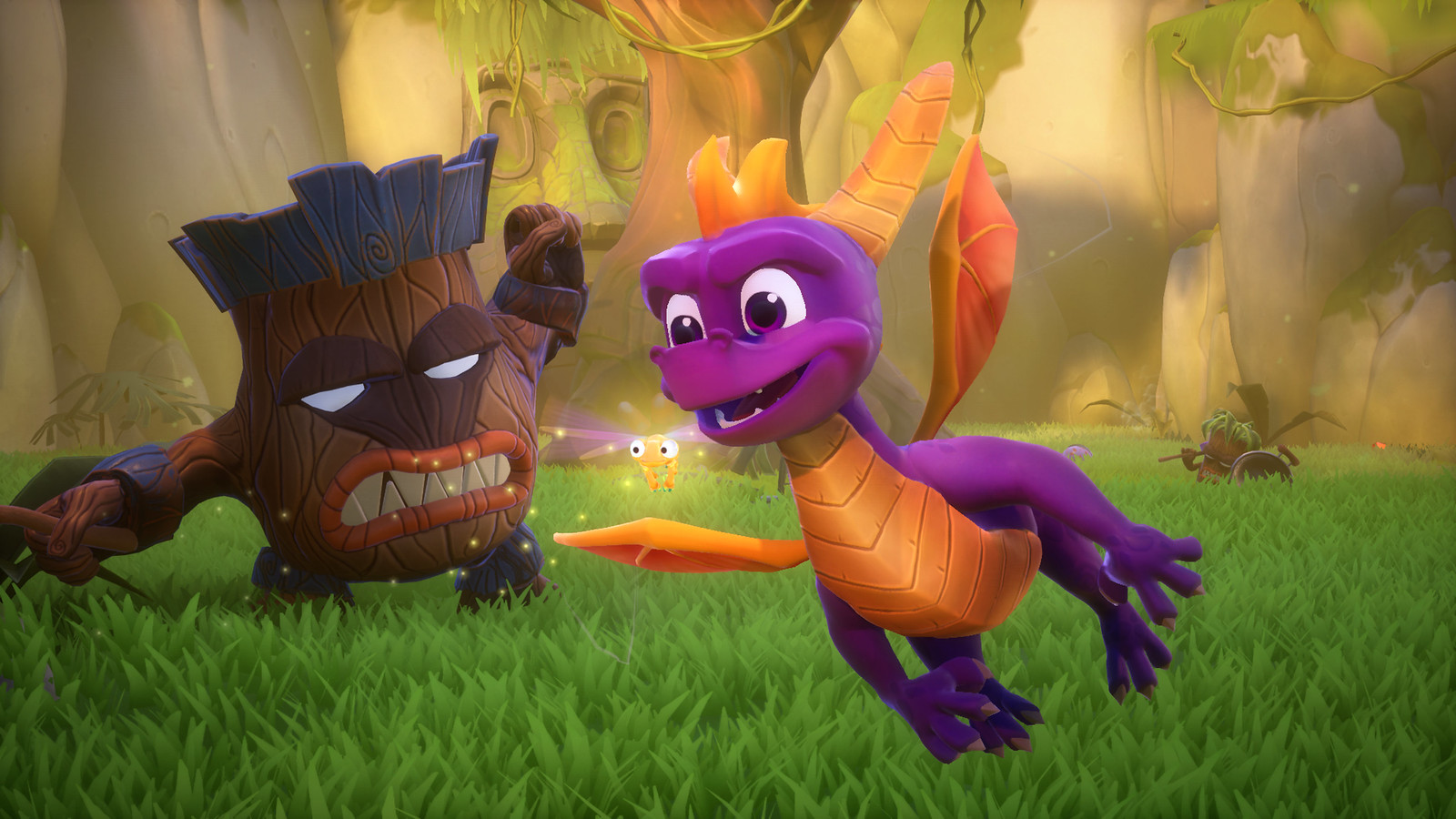 “We paid close attention to nailing details like how high he jumps or how fast he runs. There was a lot of art, math, and magic put into modernising how the player interacts with Spyro, and how Spyro interacts with the world. Some things will obviously change in a remake, but the magic stays the same! Check out our blog for an inside look at how we brought Spyro Reignited Trilogy to life on PS4.”

So tell us, which is your favourite classic on PS4?

I’ve been loving the Spyro trilogy on my PS4. I didn’t play them much on PS1 (and i only bought the ps1 versions on my PS3 at the time cos my then girlfriend was a big fan and it kept her happy while i worked) but yeah really happy with Spyro on my current machine all moderned up and shiny. :)

Crash is fun too but a lil too nerve-wracking for me in certain levels. My anxiety can’t take it. :P

Looking forward to Medievil. Again another I bought but didn’t really play much of but will do so with the upgrade.

Resident Evil I’ve never been fond of so I’ll pass but am sure this remake will entertain plenty of folk. :)

The only one that seems to be getting totally butchered is Final Fantasy VII with its pathetic episodic approach.

Of course it’s getting butchered. It’s by modern day Square Enix and headed by Tetsuya “talentless guy with no original ideas” Nomura. I wouldn’t be shocked if things didn’t get even worse closer to release (and it doesn’t get cancelled after the first episode after poor sales and come with 5 season passes). 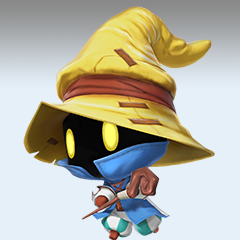