Hands-on with The Last of Us Part II, new gameplay details revealed

Find out about Ellie’s upgraded mobility, new Infected enemy types and much more

Ellie’s story continues in The Last of Us Part II, and I got a lucky opportunity to reunite with her at a recent hands-on preview event. The demo revealed copious gameplay details, from Ellie’s improved mobility to new threats ranging from guard dogs to new evolutions of the infected. It also yielded a peek at the stunning visual enhancements Naughty Dog brings to the anticipated follow-up.

The early portion of the demo features heartfelt story moments between Ellie and her companion, Dina. Ellie was already a multifaceted protagonist in the previous game, but she’s now nineteen and her age shows in the depth of her character.

She and Dina exchange playful teases, search each other’s eyes for signals, and dance around the topic of former lovers. My favourite moment between the two occurs when they enjoy a beautiful view of the Wyoming wilderness, and Ellie quietly curses to herself when she realises she flubbed an opportunity to make a move. Moments like these showcase Ellie’s tenderness and vulnerability, and remind us of the little girl Joel fought to protect.

The second half of the demo further showcases Ellie’s violent side, and the lengths she’ll go to exact justice on those who hurt her loved ones.

She faces a group of xenophobic survivors in Seattle who have captured Joel’s brother, Tommy. Ellie ventures into enemy territory to rescue him. Naughty Dog has gone through great lengths to convey that these enemies are people with lives and loved ones, not one-dimensional threats. 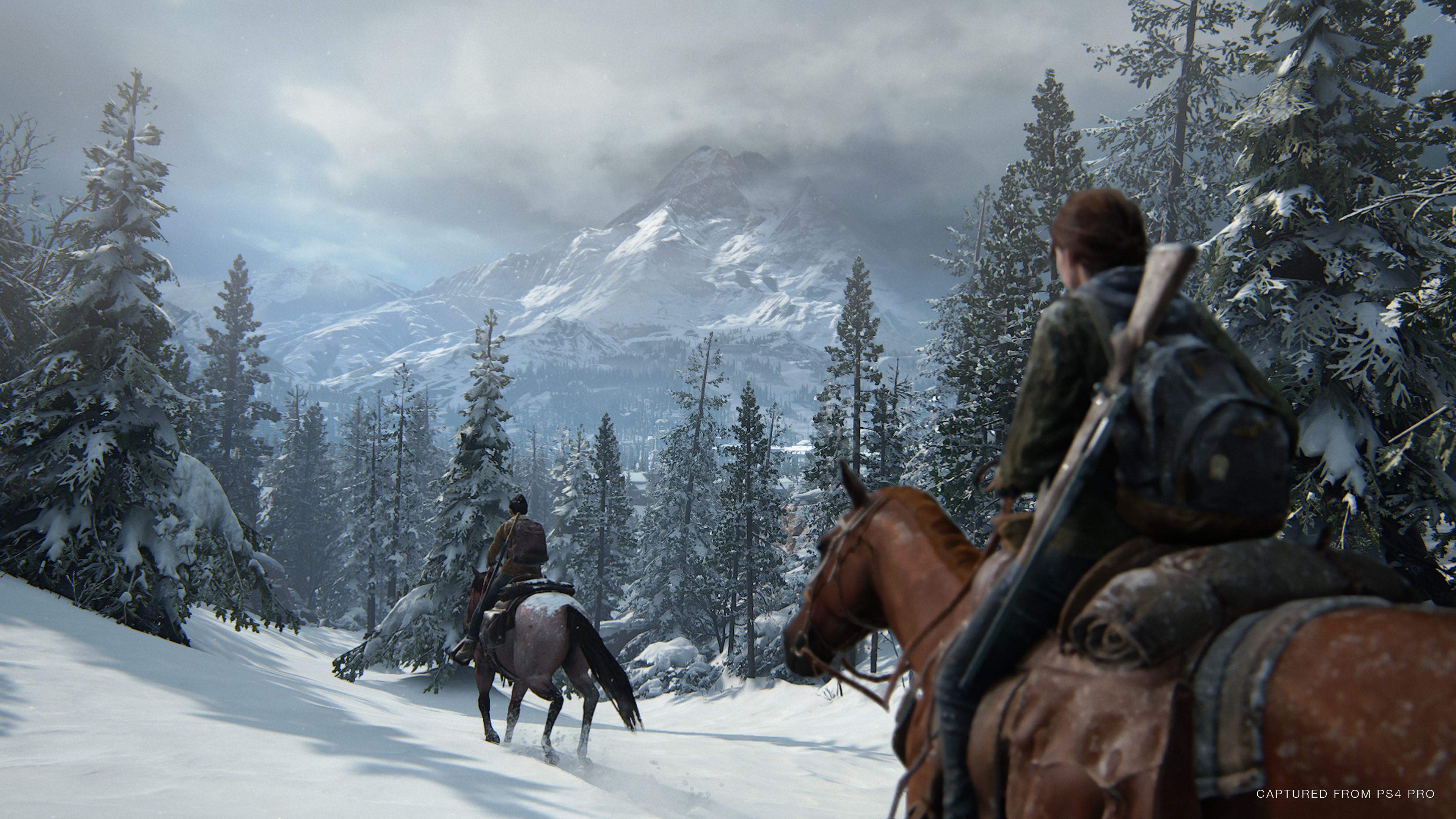 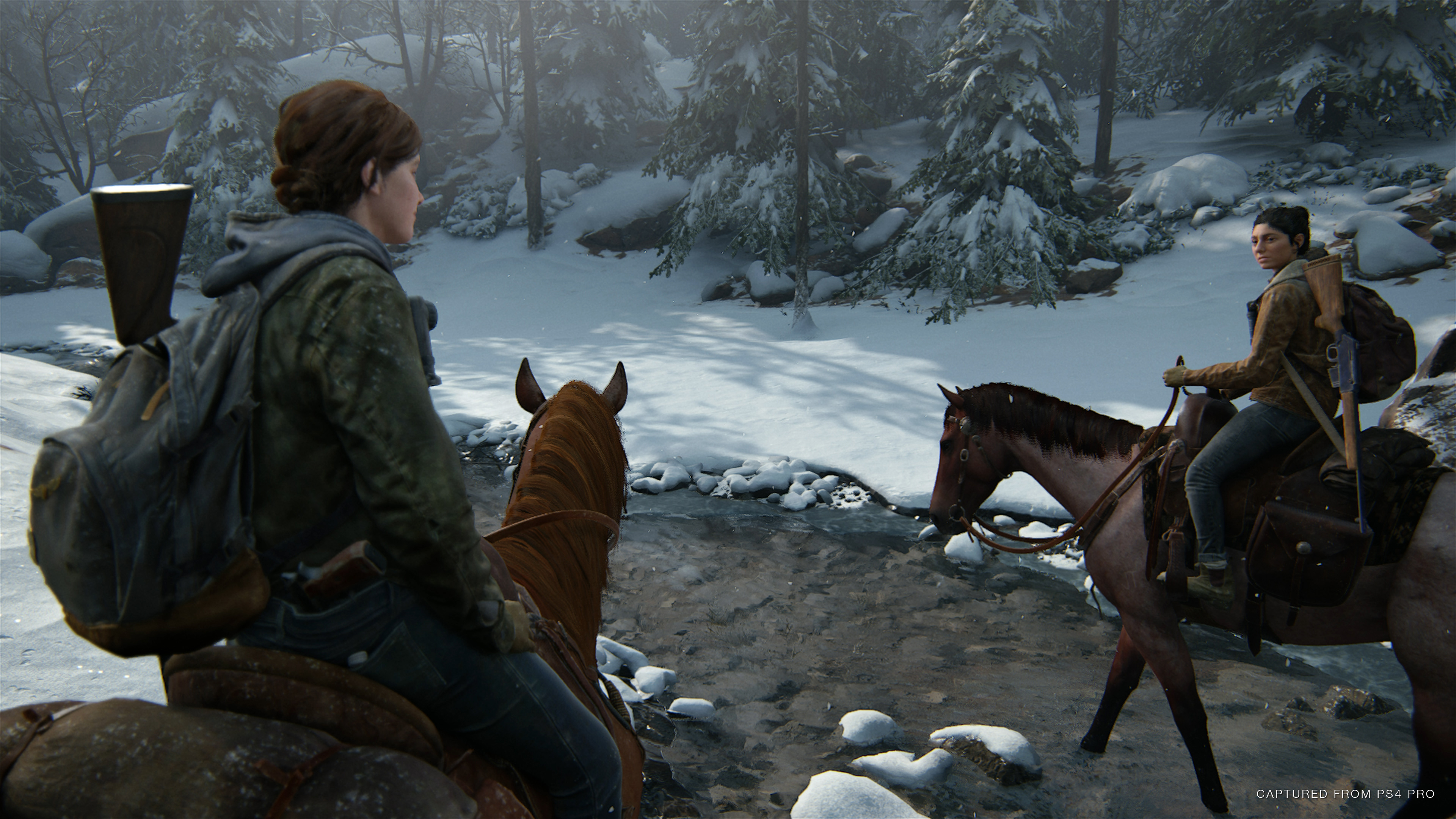 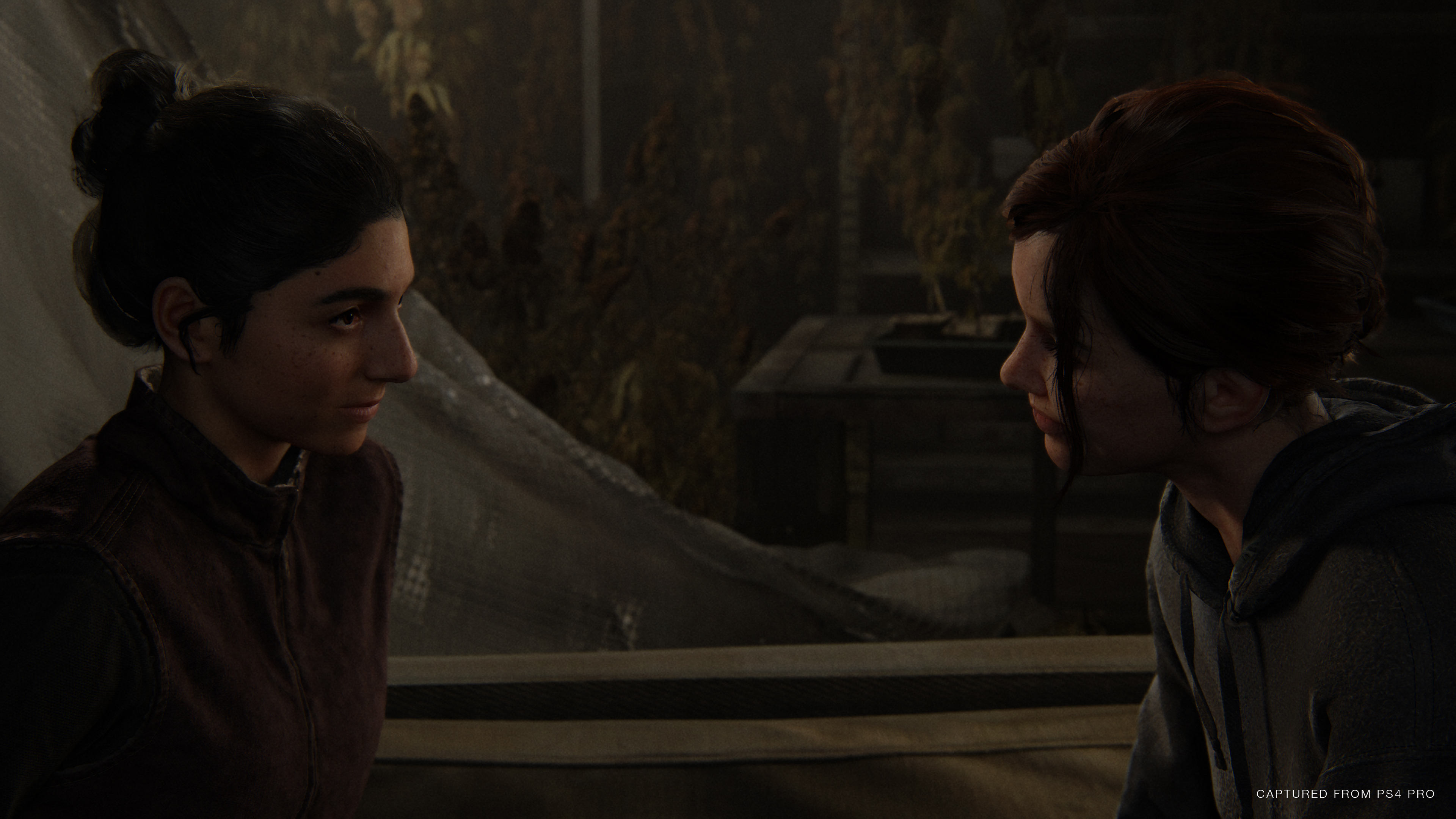 Normally, sniping an enemy with a bow and arrow from considerable distance would come with some pride and relief. In The Last of Us Part II, it might be met by the shrieks of your victim’s loved ones yelling the deceased’s name in grief. Violence is sometimes necessary to survive and endure in this world, but it constantly weighed on my conscience.

Read on for an overview of the hands-on demo’s content and key gameplay details:

The first section of the preview I played was set within the snowy, abandoned towns surrounding the survivors’ hometown of Jackson, Wyoming. Snow crunches satisfyingly underfoot and fierce winds make patterns across its surface.

A day in Ellie’s life

Ellie’s main job is to patrol the area surrounding Jackson. Early in the game she rides horseback through the shattered, abandoned buildings in the wooded expanse, where she and Dina check for signs of deadly infected, dangerous marauders, or survivors. 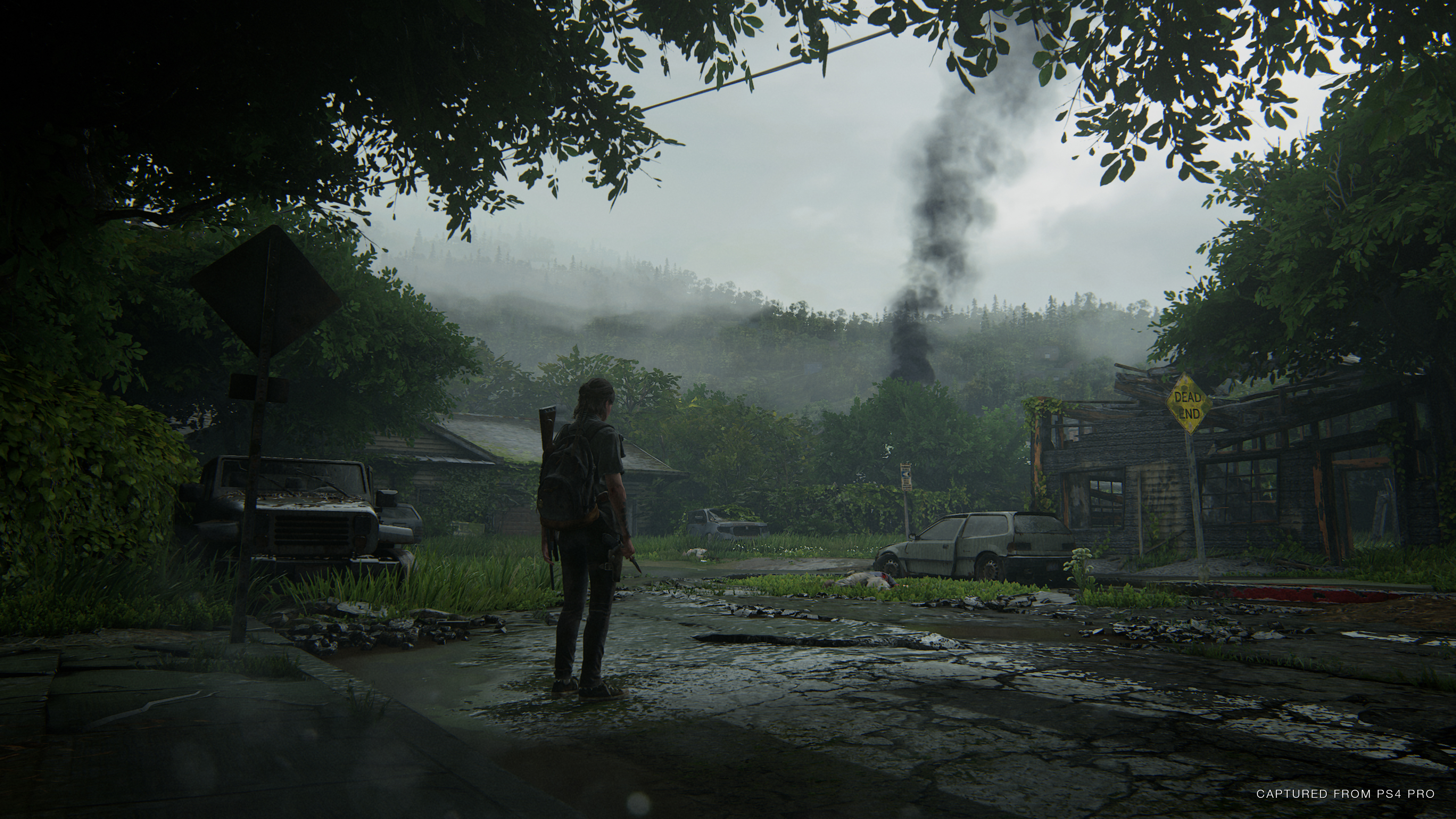 Naughty Dog elevates the visual fidelity of this grounded world to new heights. Your horse’s muscles flex and jiggle as it gallops. Tall grass ripples and tree boughs flex with the wind. Ellie contorts her face in intense focus as she silently takes down enemies. Upgrading weapons at a workbench rewards you with strikingly detailed animations like swapping out a shotgun’s magazine. The authenticity is astounding.

Ellie is more limber than Joel ever was. Players can now jump to reach higher vantage points or cross small gaps. Don’t expect to pounce hapless victims like an assassin, but look forward to expanded freedom and new opportunities for traversal.

One of Ellie’s most potent new abilities allows her to dodge incoming close-quarters attacks. Step out of the way of survivors’ axe swings or slashing Runners with a quick button tap. Dodging was especially handy when evading surprise Stalker attacks. The new feature feels satisfyingly empowering, but also necessary considering how enemies seem smarter and harder to predict. 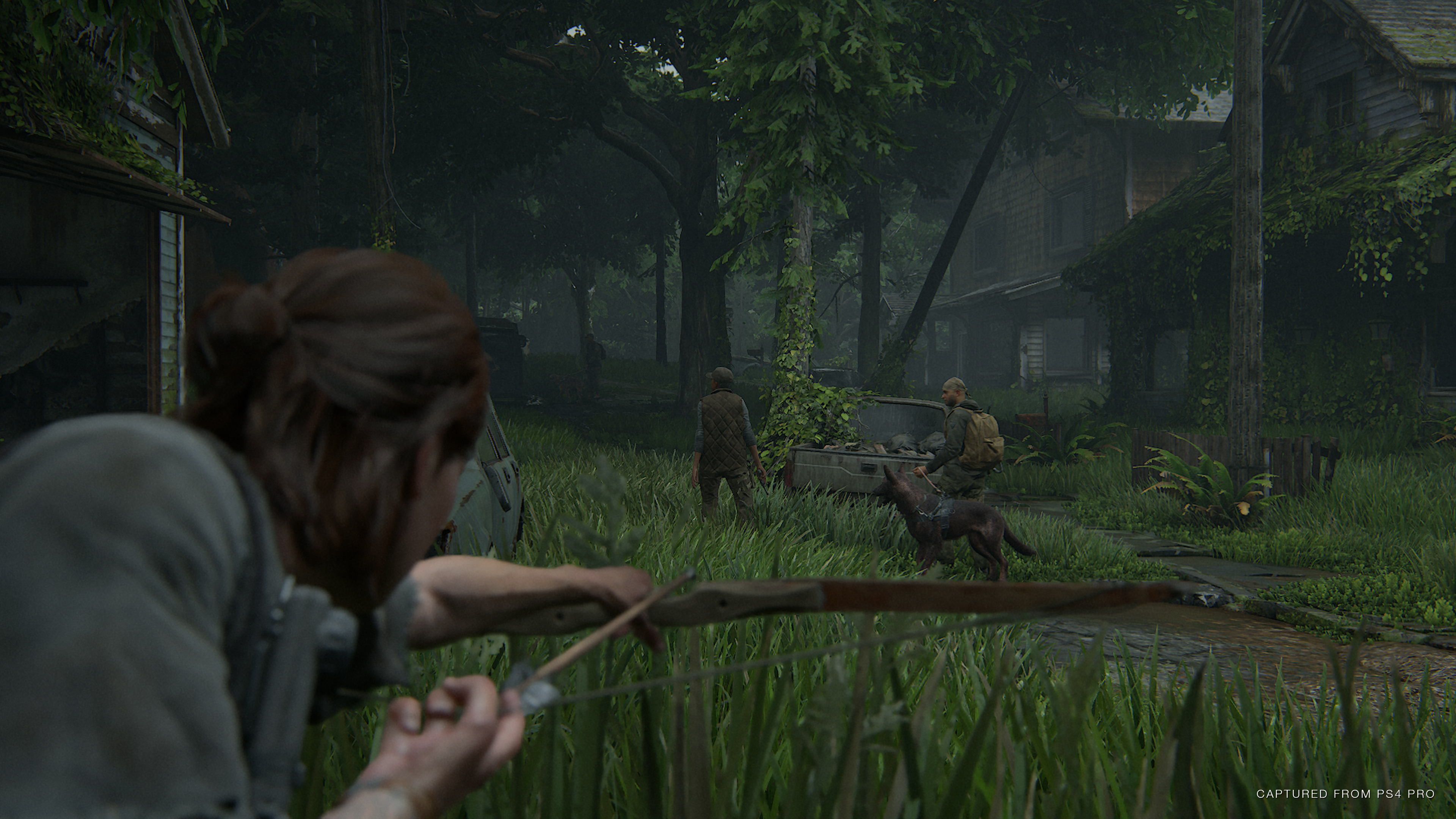 Hit the deck! Ellie can now drop to the ground by holding Circle. This is useful for quickly breaking line of sight with enemies, crawling through small passages, or keeping a low profile. The latter stealthy application is invaluable. Slinking through tall grass to get the drop on passing enemies and evading pursuers is critical with The Last of Us Part II’s new analog stealth system. Hiding yourself in plain sight among the tallgrass is simultaneously liberating and harrowing, as blowing your cover could mean being fully exposed.

…but don’t get too comfortable crawling through the grass. Trained guard dogs are on patrol, which can follow your scent and chew up your well-laid plans. Activate Listen Mode to see your scent trail. Be careful when you take out a dog’s handler, though, because solo canines are difficult to spot in the tall grass without their master walking next to them.

Getting jumped by a dog is not only nerve-racking and dangerous, it presents players with the moral choice of whether they flee or take it out. Naughty Dog confirms that you don’t have to kill these animals to progress, and personally… based on my heavy heart following the demo you’re better off evading them.

Shamblers are horrifying, walking pustule-clusters that spray gaseous acid when they get near you and take a ton of damage. Once defeated, these festering threats explode with violent force. They’re faster than they look and are awful to look at. Proceed with caution. 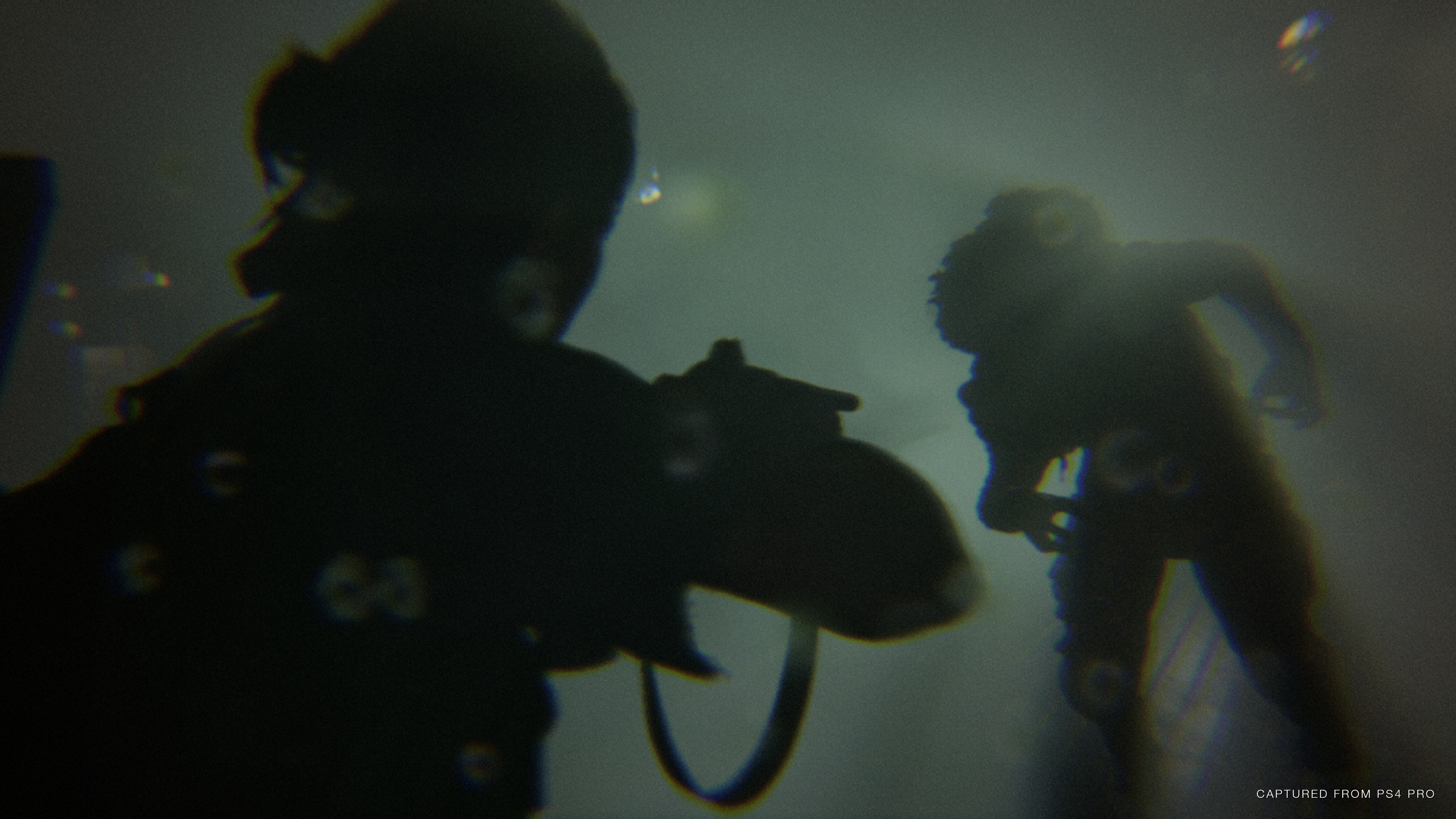 Supplements can still be collected to unlock abilities. New to The Last of Us Part II, players can choose from multiple skill upgrade paths to customise Ellie to their playstyle and we got to see just some of these in action. Survival focuses on improving health, expanding Listen Mode’s range, and throw distance.

Canisters are a new crafting material that let Ellie attach handmade suppressors to her semi-automatic pistol. This makes her next three shots dead silent, expanding Ellie’s strategic options in the field. As a stealth-focused player, I found great relief upgrading my silencer’s durability. 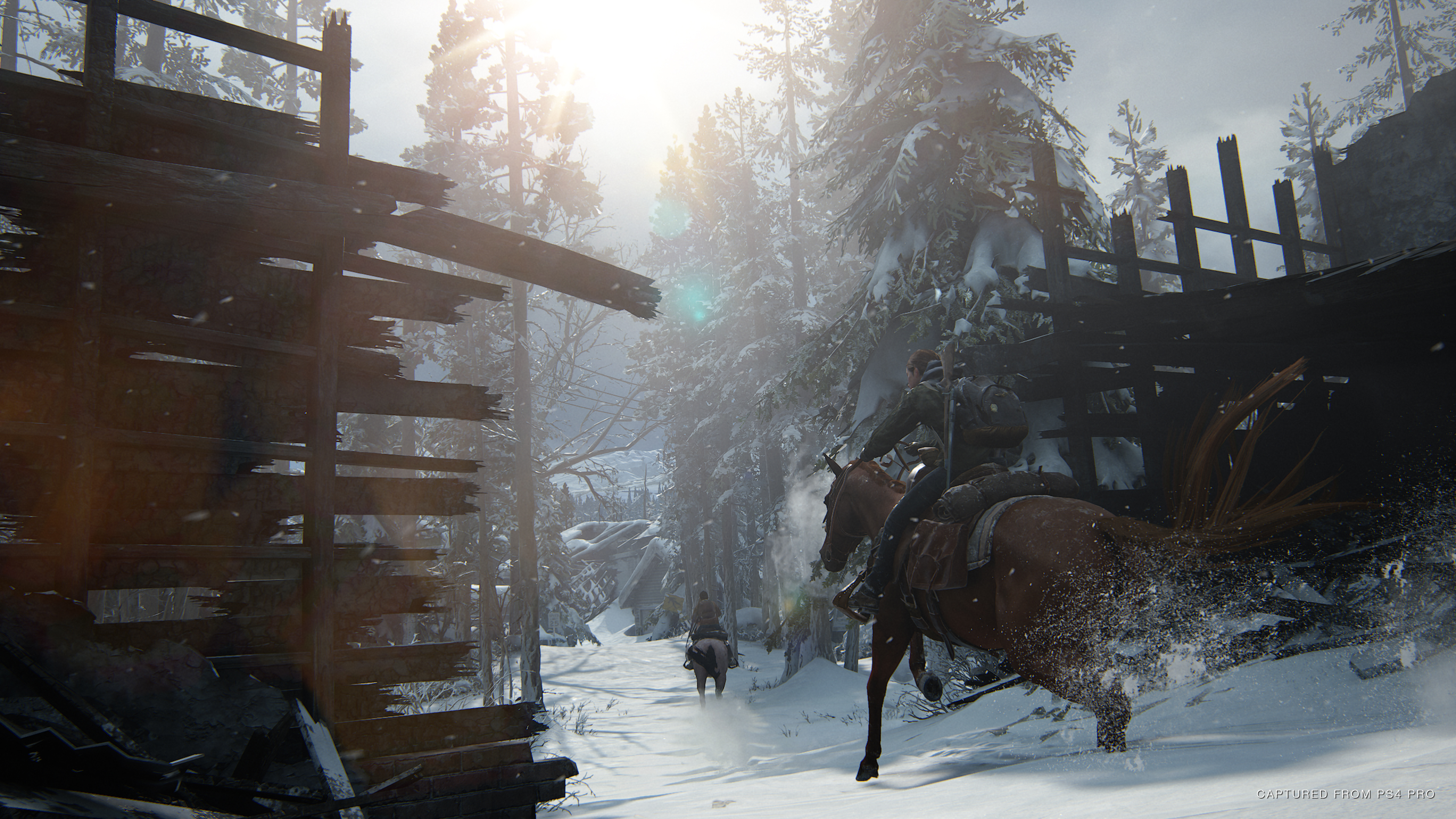 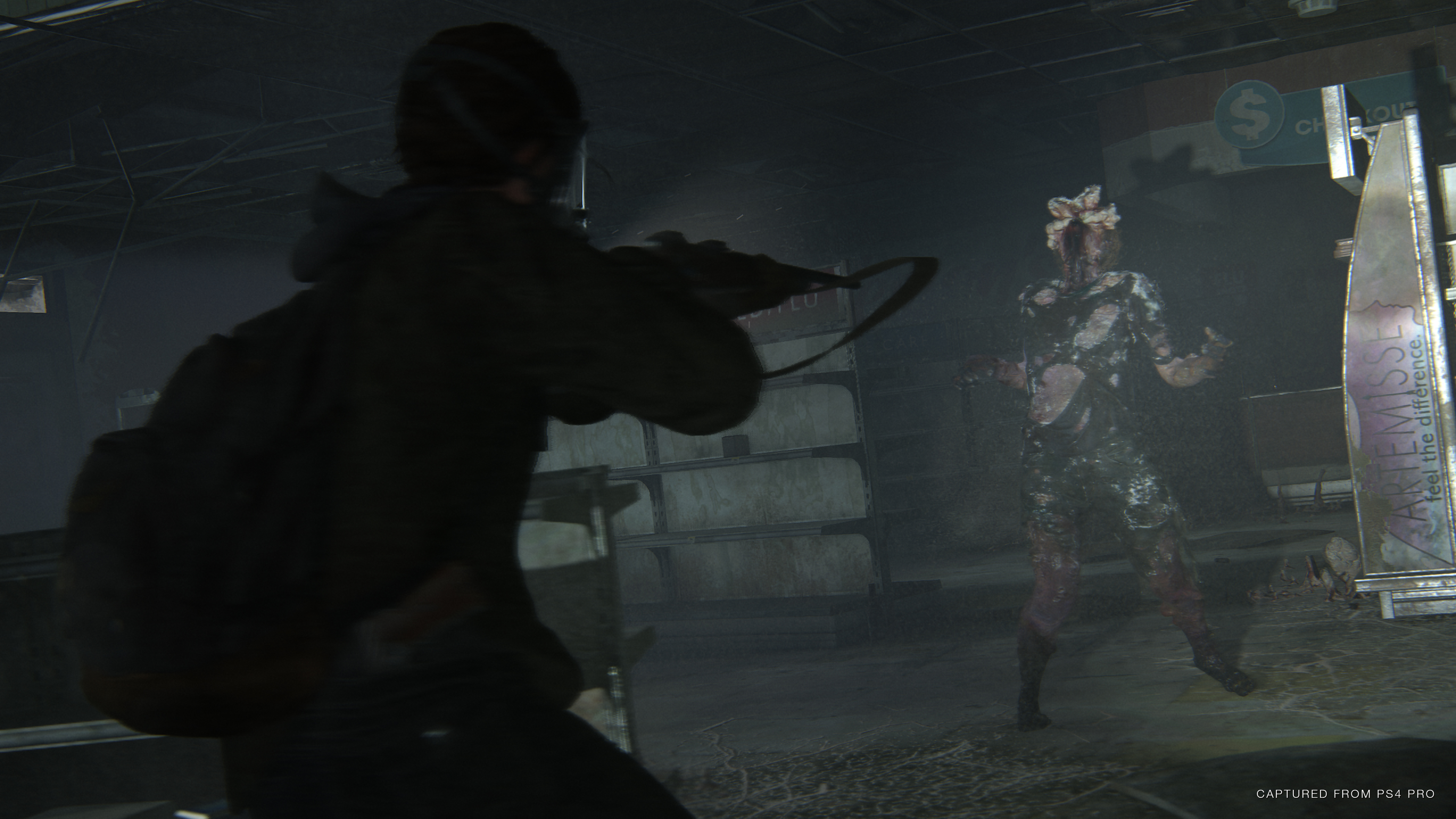 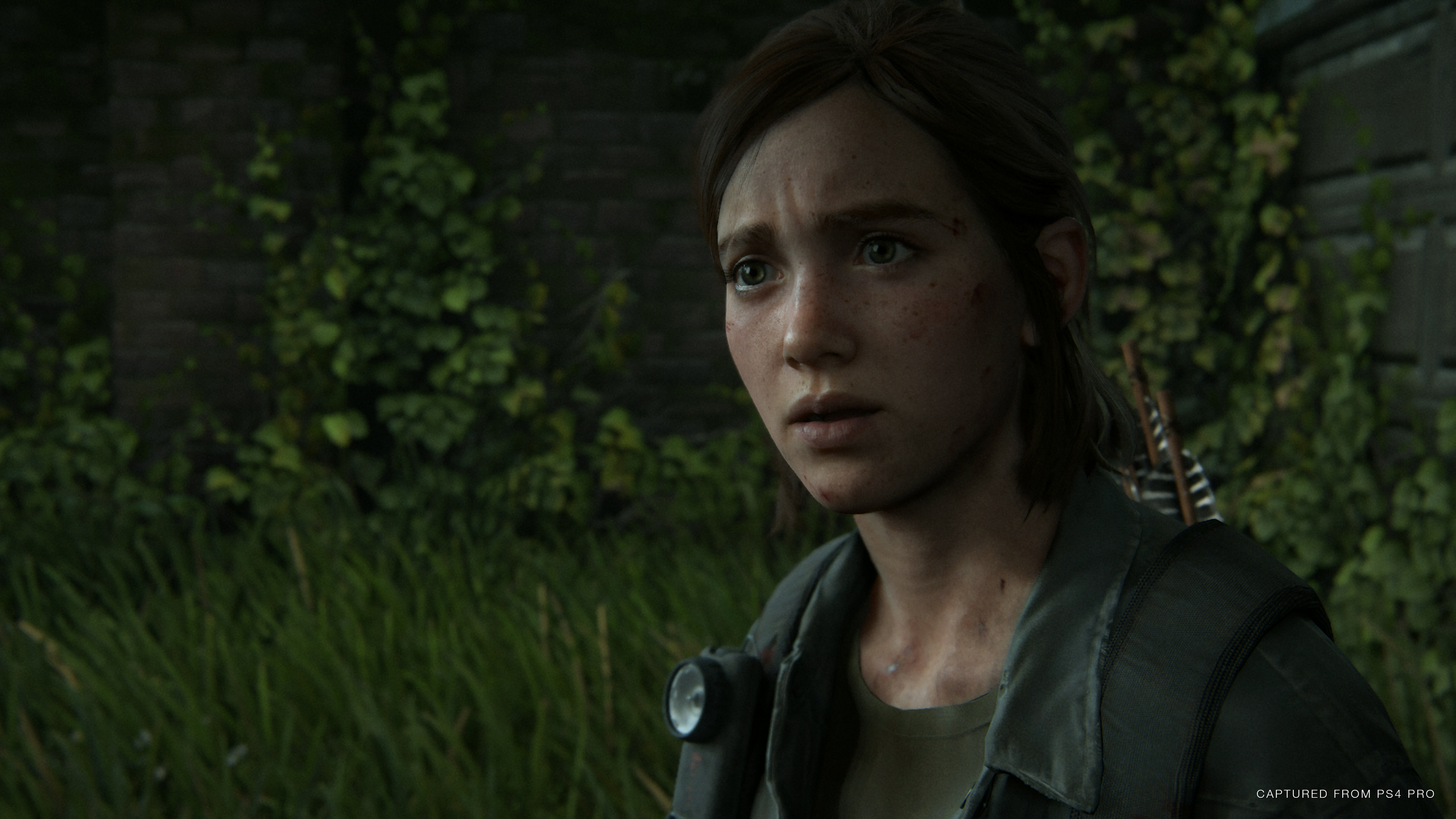 This hard-hitting sequel takes the core gameplay of the original and expands players’ tactical options at every turn. New threats and smarter enemies elevate the challenge to meet Ellie’s enhanced range of abilities, so you’ll need to learn new tricks to survive in an unforgiving world. The weight of my violent actions in the demo stuck with me just as long as my awe at the jaw-dropping world Naughty Dog is creating.
Discover what the future holds for an older, wiser, and more dangerous Ellie when The Last of Us Part II comes to PS4 and PS4 Pro 21st February, 2020. 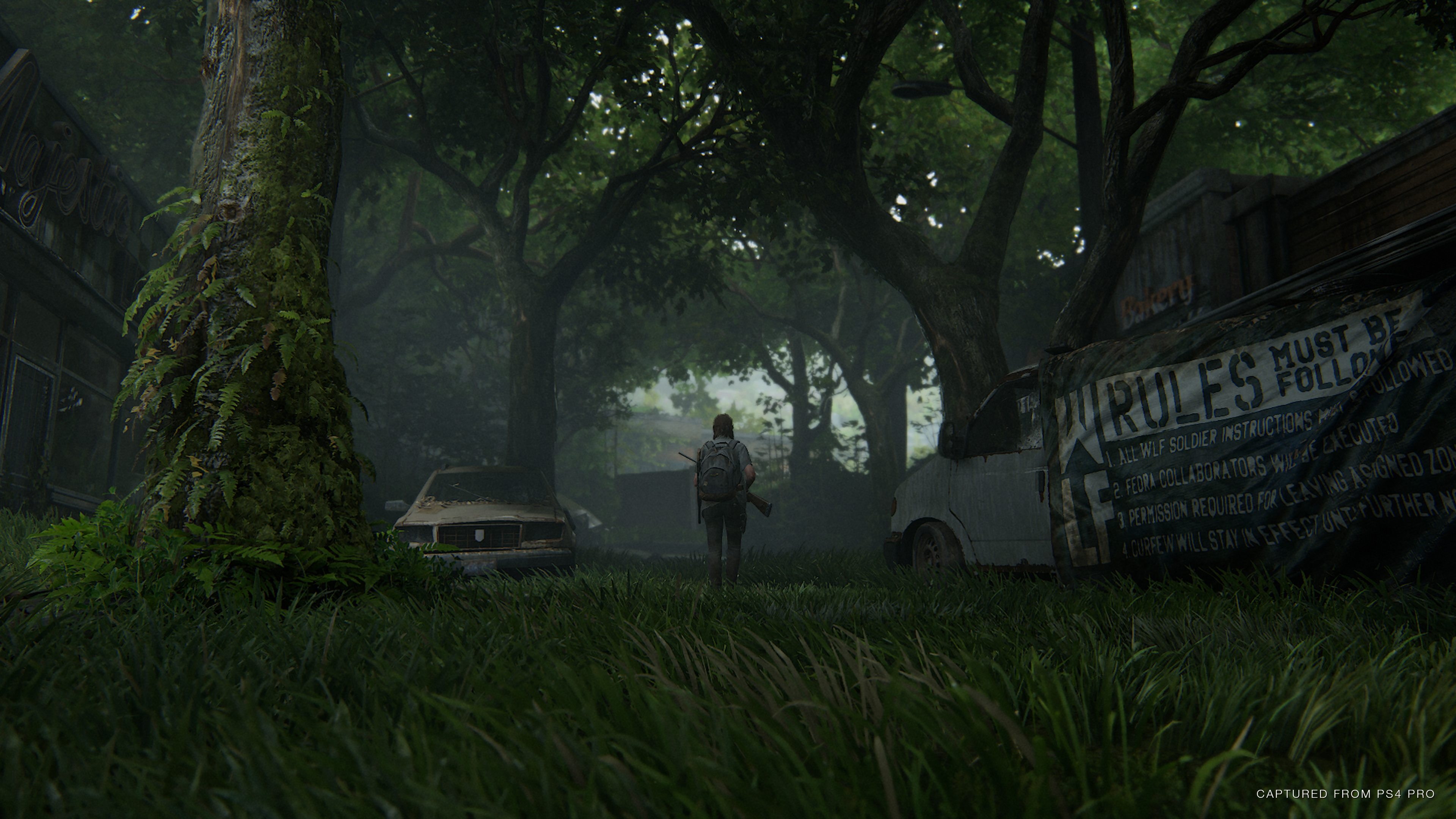 The Last of Us Part II

The Last of Us Part II 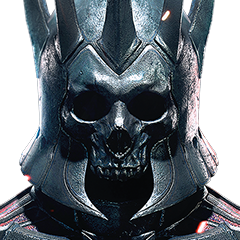 The Naughty Dogs are now tracking us down😟😦😧😵 Prepare for heart pounding adrenaline rush.

As amazing as this looks, (and it sure does!) I’m so disappointed that there’s no multiplayer!

It doesn’t need multiplayer at all. This game is going to be huge, that’s why its on 2 discs. I want this story and experience to be the best it can be, having multiplayer can hinder that experience. Maybe multiplayer may come out in the near future, when a certain console, that we can’t officially name, comes out late 2020.

Neil Druckmann confirmed today, there will be no multiplayer. Interview with ” The Telegraph ”

to be fair, Multiplayer was omitted from Uncharted collection because the then upcoming Uncharted 4 had it and they didn’t want to fragment the player community further.

I’m not massively fussed about it not being in this game. Sound like it may be coming later. But while I did play a bit of it on the PS3 version I grew tired of it quickly and didn’t play it at all on the PS4 remaster. I’ve never been much for sneaking about and far preferred the multiplayer in the Uncharted games and still play the one in Uncharted 4/Lost Legacy often. But yeah i can understand the lack of that mode being disappointing to some but I’d rather they keep focusing on the single player mode here and get it out in Feb like planned and they can work on multiplayer if necessary after then. It’s getting kinda late in the PS4 lifespan to delay it any further.

Any update on the MLB19 screwup for Europe on PS Plus?

??? Did you expected update in article about LoU2?

By far the creepiest and most terrifying

Scary and a little creepy

This game looks amazing can’t wait to get my hands on this.. I love great story and Naughty Dog knows how to make a great cinematic looking game with story that will blew us away.. 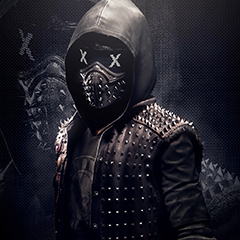 Wait, so Ellie is trying to free Tommy from the bandits