Everything you need to know about the Romancing SaGa 3 HD remaster, out today on PS4

A guide to the JRPG classic's story, combat, characters, music and more hits Europe for the first time

For many JRPG fans, the ’90s was truly a golden age. Countless classic titles were released during this decade and have since entered a ‘hall of fame’ of sorts amongst fans and critics. For western and Japanese fans, there’s likely a lot of overlap between the titles they’d raise as all-time favourites, including titles like Final Fantasy VI, Chrono Trigger, and Xenogears.

Romancing SaGa 3, on the other hand, could be raised by any number of Japanese fans, though you might be hard pressed to find any western gamers who have played it. Until today, that is.

An HD remaster version of Romancing SaGa 3 launches today in the west for the first time on PlayStation 4 and PlayStation Vita, twenty-four years to the day from its initial release in Japan. While the franchise itself may not be well known outside of Japan, western gamers should take heart in knowing that the series shares its roots with Final Fantasy, the SaGa series creator Akitoshi Kawazu having filled key development roles on the original Final Fantasy and Final Fantasy II.

Needless to say, Romancing SaGa 3 has the JRPG credentials behind it – but what sets it apart from other installments in the Final Fantasy or even Dragon Quest series?

Keep on reading to learn more about what makes Romancing SaGa 3 so good, and why it deserves to be included in the pantheon of beloved classic JRPGs. Although the Romancing SaGa series is venerated as one of the definitive JRPG series, along with the likes of Final Fantasy and Dragon Quest, in Japan, you might be surprised to learn that some of the series’ major influences are decidedly western in origin.

Kawazu-san commented, “as someone who read novels by Tanith Lee, Michael Moorcock, and Ursula K. Le Guin, and came into contact with tabletop RPGs through Dungeons & Dragons and computer RPGs through Ultima and Wizardry, being able to offer a title for the West is a great joy.”

You can clearly feel the influences from tabletop RPGs mentioned by Kawazu-san in the branching decisions present in Romancing SaGa 3. 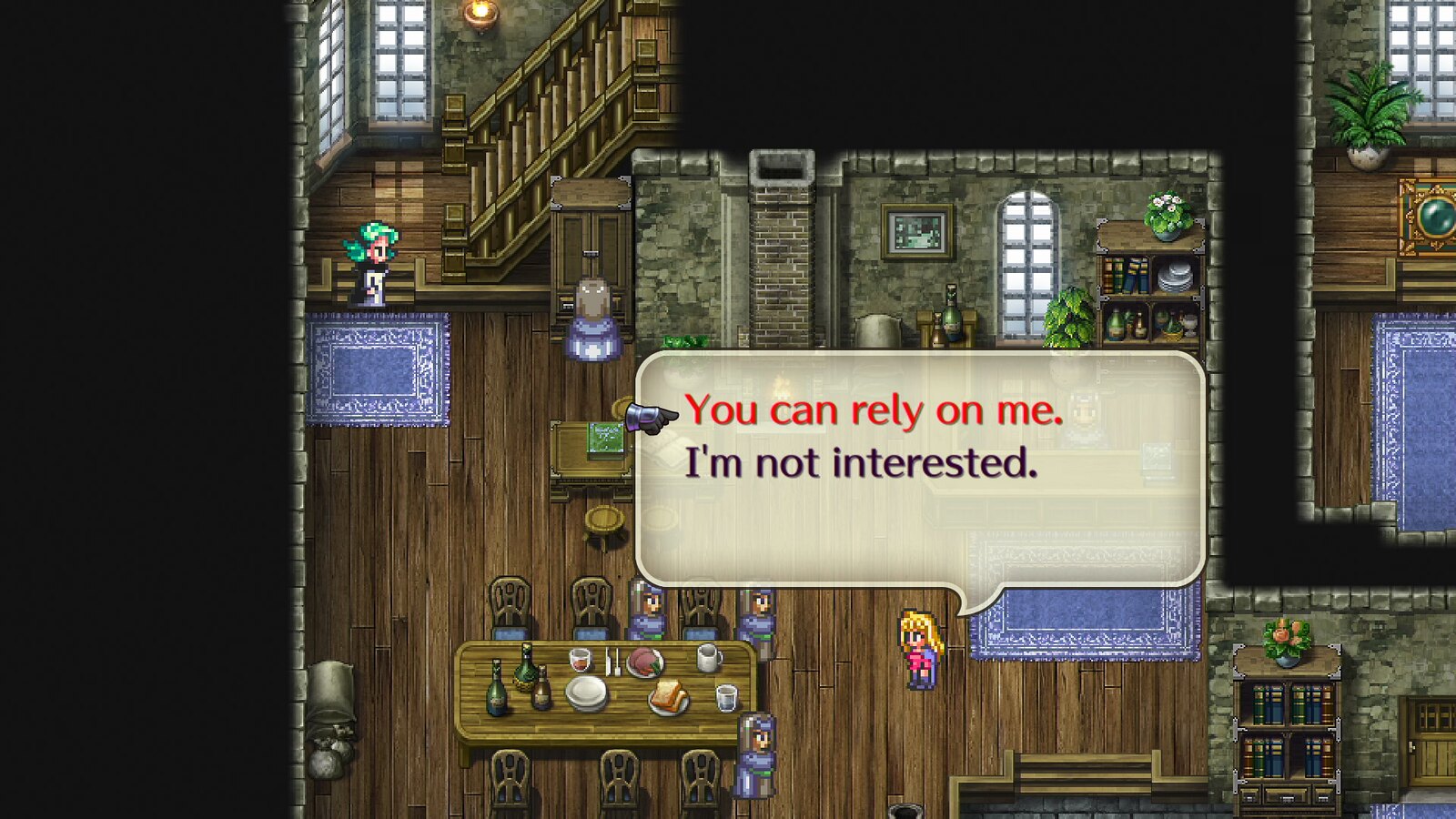 While you as the player do take control of one of eight main protagonists who does have a set archetype, at various points in the game you’ll have to make a decision that will greatly impact that character’s outcomes and the greater narrative. Similar to tabletop RPGs, the fun comes from roleplaying as a certain character and making decisions based on who they are in order to see that character’s story through.

While other JRPGs of the same era also touted sweeping stories and dramatic character arcs, none quite captured the direct decision making that Romancing SaGa 3 features. 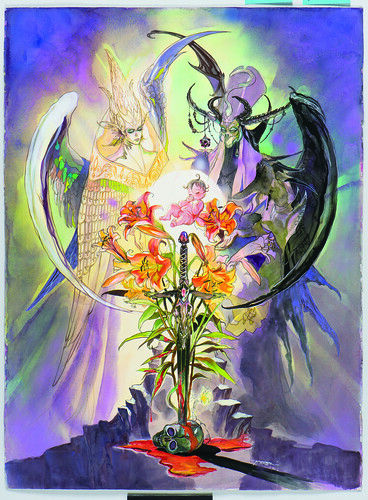 So, decision making plays a key role in Romancing SaGa 3 – but what is the overarching narrative?

Every 300 years the world befalls a tragedy known as the Rise of Morastrum – a deadly eclipse during which any living thing that is born is destined to die, except for a few extremely rare exceptions. These sole survivors are fated to either become forces of evil, or righteous saviours.

The story of Romancing SaGa 3 picks up roughly a dozen years after the last Rise of Morastrum, so needless to say, the drama of a purported ‘child of destiny’ will play out as you explore each of the eight characters’ own personal stories.

In terms of characters, there’s plenty of variety to choose from. The main cast is also perfectly split with four male and four female characters, making the game unique for its time. It’s completely up to the player as to which character they choose to play as, but as each character has their own individual path with branching decisions throughout and there are multiple sides of the story to uncover – replayability is high for this title.

Many of the characters have secret, and not so secret, ties to one another, such as Ellen and Sarah being sisters, or Katarina being Monika’s bodyguard, so you’ll definitely want to experience their stories from each perspective.

The look and sound

Alongside Kawazu-san, the SaGa series has two other longtime veterans who have helped mold the series: Kenji Ito, who has lent his prowess to the music, and Tomomi Kobayashi, whose colourful illustrations have defined the look of the series. 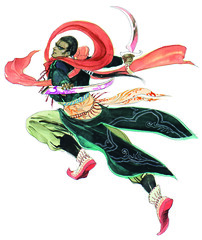 Fans of the Mana series will likely recognize Ito-san from his work there, but the SaGa series has remained a special one to Ito-san: “[The music of SaGa is] quite special to me because it’s a project that helped me build my skills as a composer.”

From Romancing SaGa 3’s driving battle themes to its hopeful, if not whimsical, opening theme, there’s plenty for players to look forward to throughout their journey. Ito-san also composed eight themes to accompany each of the main protagonists, his approach to which began “by reviewing documents regarding the characteristics, physique, and other aspects for each character. Then, we try and create a melody or mix that lets you feel that character’s determination or will, so that the character’s personality and ‘feeling’ really come across within the music too.”

Keep this in mind as you play through and come across all the different themes in the game.

Kobayashi-san has worked on the Romancing SaGa series since its inception and has lent a colourful and dynamic look to the various games. Her style incorporates soft, sweeping brushstrokes, a large colour palette of watercolors, and plenty of intricate details in the characters’ clothing and backgrounds.

Japanese manga fans may find her style reminiscent of the art found in shoujo manga – something that Kobayashi-san has actively tried to leverage in her character designs.

“I assumed that more men than women played these types of games, so it was my goal to add more elements that would be appealing to women in my art.”

Although nefarious villains and horrible monsters are a common occurrence in RPGs, Kobayashi-san has made it a point to keep a cohesive sense of elegant design in her work on Romancing SaGa 3.

“I try to turn things which are dark or frightening into something beautiful. Rather than eerie, I try to make things elegant, romantic, and dream-like.”

Really, though, Kobayashi-san’s art speaks for itself, so take a look at some of her beautiful creations throughout this blog.

So, Romancing SaGa 3 has it down pat in the story, music, and art categories, but let’s get down to brass tacks and talk battle systems.

Like many other staples to the genre, Romancing SaGa 3 employs turn-based combat for you and your party of five characters, plus your enemies. What’s different here is that positioning and your party’s formation plays a big role in how you can maximize your offence while mitigating your weaknesses. It can also enable you to perform powerful attacks that would otherwise be impossible. 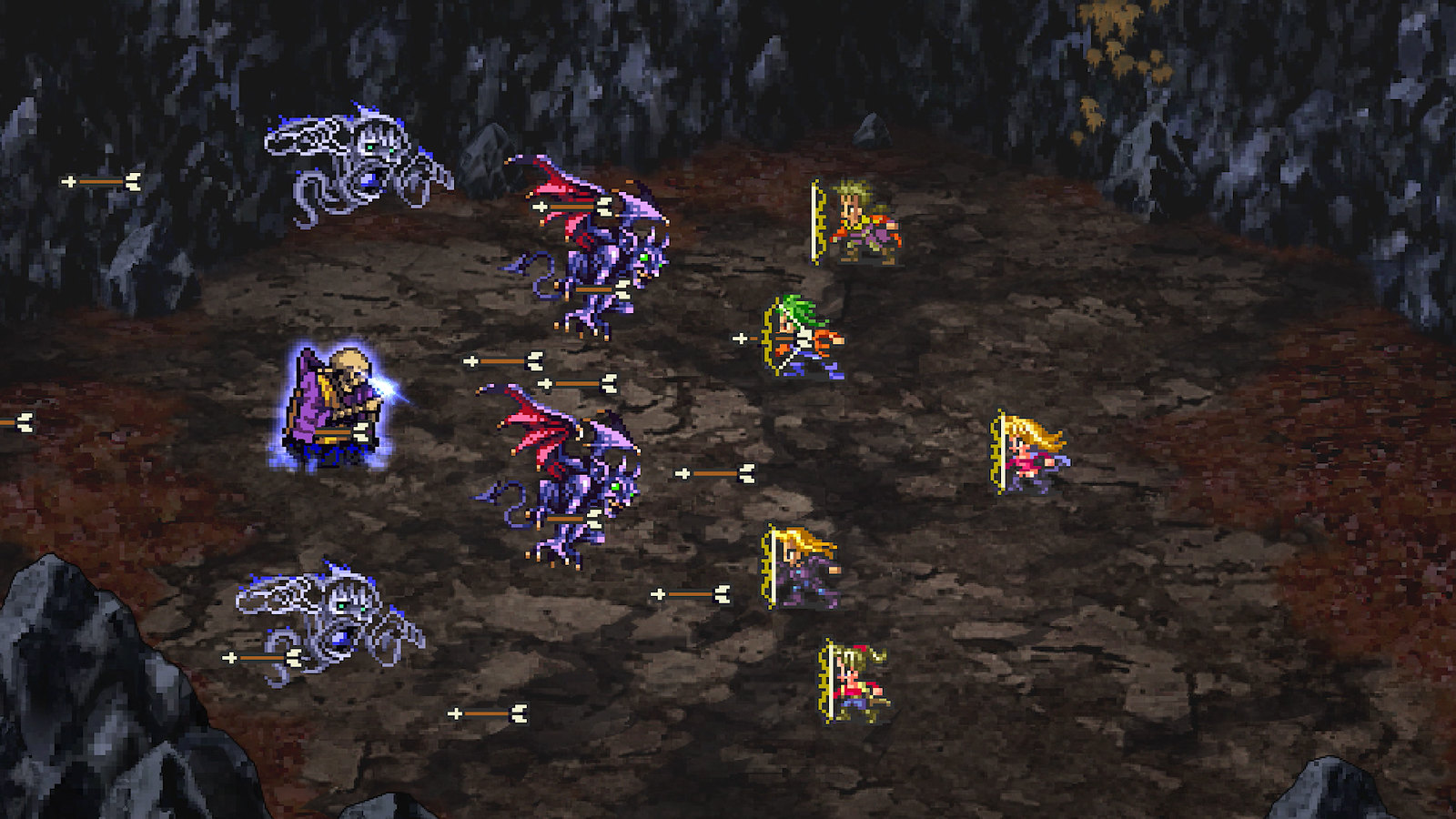 ‘Inspiration’ also plays a major role in battle. With this system, every time a character attacks, there’s a chance inspiration will strike (in the form of a lightbulb appearing above that character’s head!), and they’ll launch a new attack. Your character will be able to execute this new attack at any time afterwards, so suffice to say it’ll be beneficial to partake in as many battles as possible to grow your characters before taking on any major baddies.

There is also a unique battle system called Mass Combat within the game. When you opt for Mikhail as your main character, you can partake in large-scale battles where you’re in command of an army. Naturally this battle system differs quite a lot from the normal battle system, but it’s one you’ll definitely want to try out as you play through the game.

There are also other mini-games present in Romancing SaGa 3, so keep your eye out for these different modes while playing. 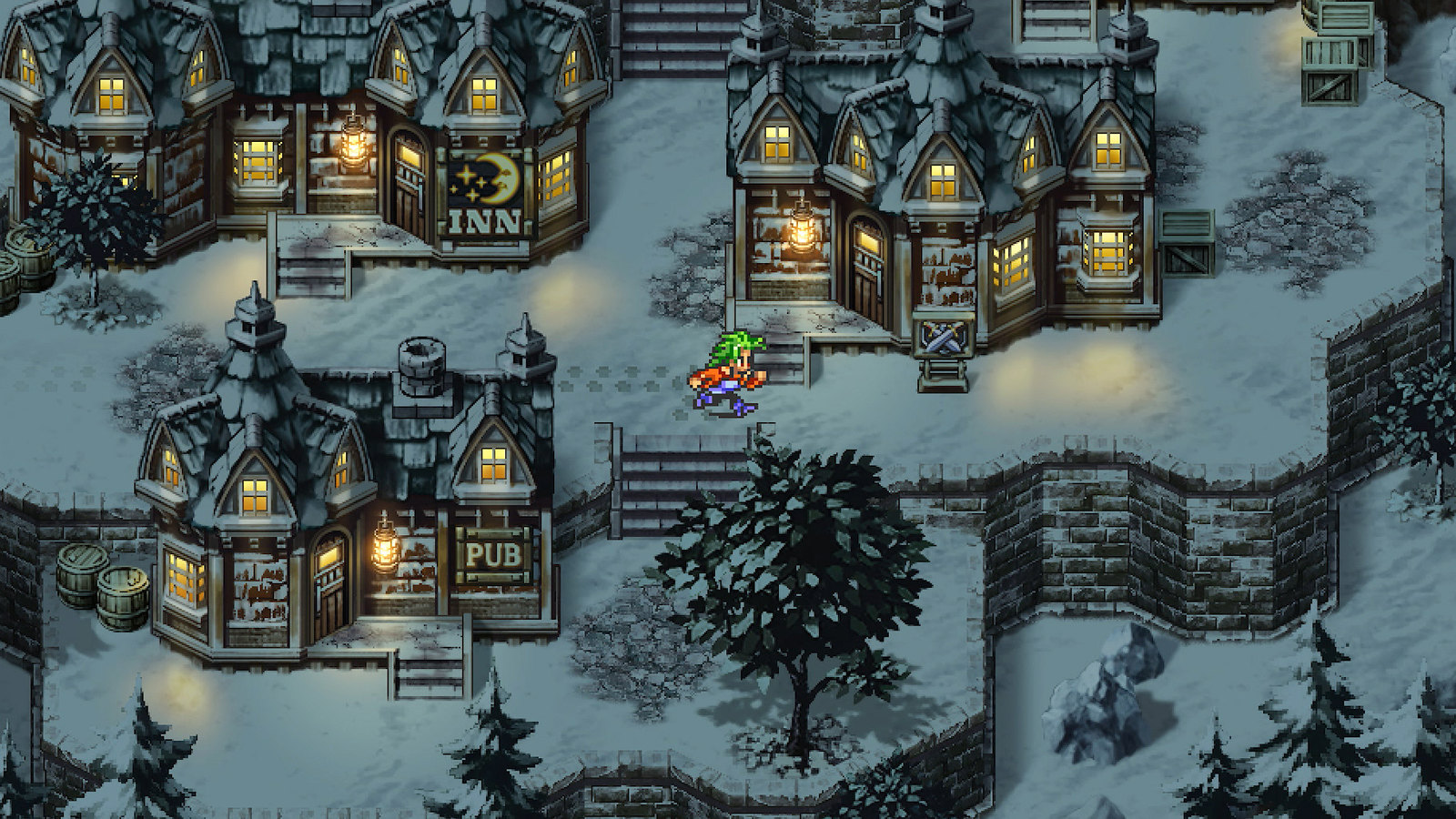 Being that Romancing SaGa 3 is an HD remaster, this version features gorgeous optimized graphics for modern platforms. Additionally, there is a new dungeon called the “Phantom Maze” for players to explore. There’s also a NEW GAME+ function where you can carry over some items, learned abilities, money, skill levels, and more to a new game.

Romancing SaGa 3 truly is a game to be experienced. With its eight main protagonists, multiple possible endings stemming from the free-form scenarios, revolutionary player choice and battle systems, there’s plenty for JRPG lovers to look forward to here. It’s been a long time coming, but in the words of Kawazu-san: “[…] being able to offer a title for the West is a great joy. I hope you enjoy playing.”

Romancing SaGa 3 is now available on PlayStation 4 and PlayStation Vita and is available at a 20% discount from today until 4th December, 2019. New fans can also look forward to the upcoming release of SaGa SCARLET GRACE: AMBITIONS on 3rd December for PlayStation 4.

So glad this made it over. Already bought the PSV and PS4 version. Can’t wait to get home and play. Gonna go with my man Khalid. ✊🏾

Thank you Ito, Kobayashi and especially you Kawazu for making it so I can play this game here. ❤️ ❤️

Btw I know it’s a long shot but have y’all considered making a limited box for these games? And bringing over the scarlet grace limited edition from Japan? I love mine but I have trouble reading it all 😊

You know, I was very interested in this release. But then I saw the price…

Even with the “generous Launch-Discount” it’s a bit too much. :(

I agree. Remaster or no, it’s a pretty steep price for something that is a ~25 year old game. 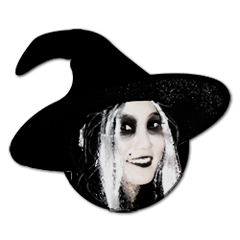 Looks like I’ll be waiting for a bigger discount then, which means that I will probably be buying the Switch version since Sony don’t like including Vita games in sales.

Colourful low resolution sprites on a darker higher resolution backgrounds does not really fit. What is it with these 2D ‘remasters’ that they almost always end up looking a mess

Well, would jump right in with RS2 and RS3 especially that they are available for Vita but I’m waiting for RS1 to appear on Vita as well. There were PS2 remasters on Vita which worked nicely so I think it should be possible to bring it here in that form (or at least a PS3/PS4 port of PS2 version like the one for PS3 in Japan).