Pick from Olympique Lyon, SL Benfica and Valencia CF and compete to be in with a chance to take part in the final, live at your chosen team’s stadium

Greetings, PlayStation friends! Enjoying playing EA Sports FIFA 20? Think you’re ready to step up and enter the world of competitive gaming? Now is your chance because PlayStation is inviting you to enter new Tournaments* where you can become the latest star of one of Europe’s best football teams. Olympique Lyon, SL Benfica and Valencia CF are ready to welcome you into their stadiums.

Choose the club you want to represent and battle it out all the way to the live final at each team’s own stadium and, who knows, you might just become the team’s next star signing and start competing as a pro. 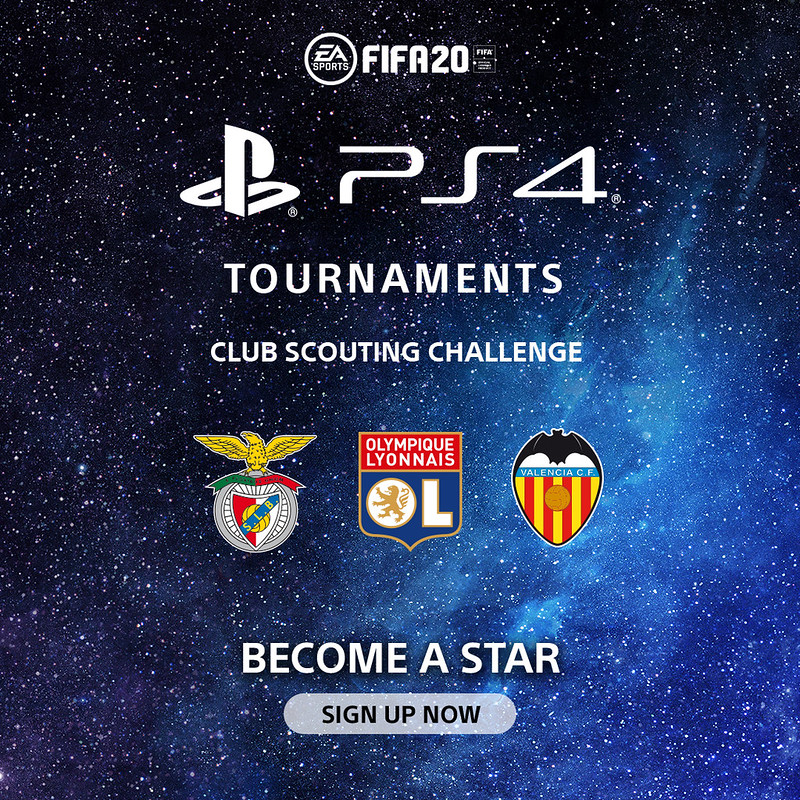 Competition Phases: For each club tournament, there will be two separate qualifiers, so you can pick which date suits you best. Once you register, you will play versus different opponents, progressing along in the bracket. The 16 players that make it to the end will have a new phase to confront, this time live at the stadium of the team they’re competing for.

Prizes: Everybody is a winner in these tournaments! We will reward everyone who enters a club tournament with an exclusive customised PS4 theme dedicated to their team.

For those who progress to the live final, they’ll have a chance to win the following:

Ready to play? Check out Tournaments in the Events tab on your PS4 console to sign up for the PS4 Tournaments: Club Scouting Challenge. For additional information, please visit playstation.com/tournaments as well as here for each Club’s terms and conditions for their tournament.

*These tournaments are being run by each Club individually and not part of the EA Sports FIFA 20 Global Series and do not award ranking points for that competition.